Since I’ve been slow on posts lately I thought I’d do another day in the life!

This particular day was March 8th.

I think it’s possible that I’m still not over my jet lag since coming back from America because I found myself wide awake before my alarm had gone off at 6:00. No complaints though, if I can keep this sleep routine up I’ll be very happy.

I got out of bed, washed my face, and made breakfast while I watched a few YouTube videos. I did my skincare and makeup after that and in a rare turn of events was left with some time before I needed to leave for school. 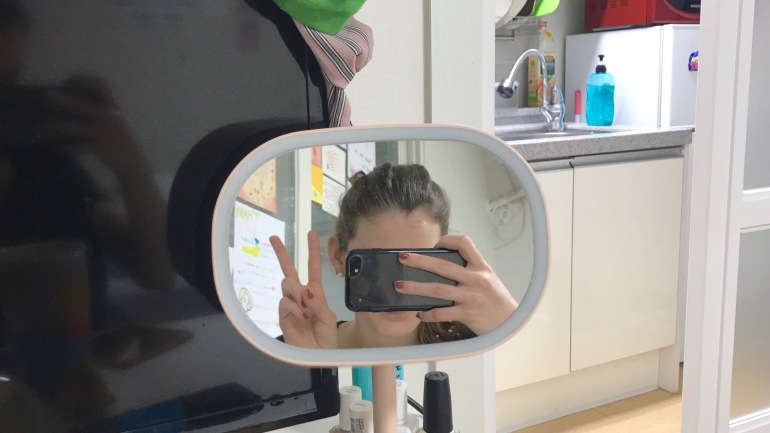 Before I left I heard a certain pitter pattering and looked outside my window to see that it had started snowing.

So umbrella in tow I headed out. First stopping in the convenience store by my house to grab an orange juice and then up to school.

Unfortunately it was pretty warm so all the snow on the ground was just turning into mushy wet slippery death puddles. Thankfully though I made it up to the school unscathed. 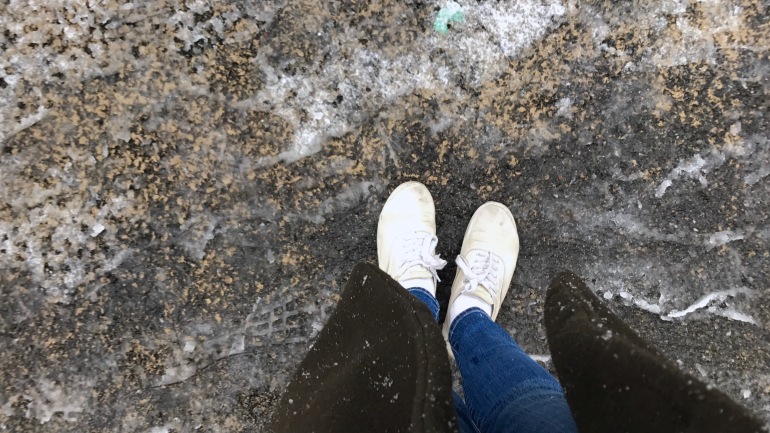 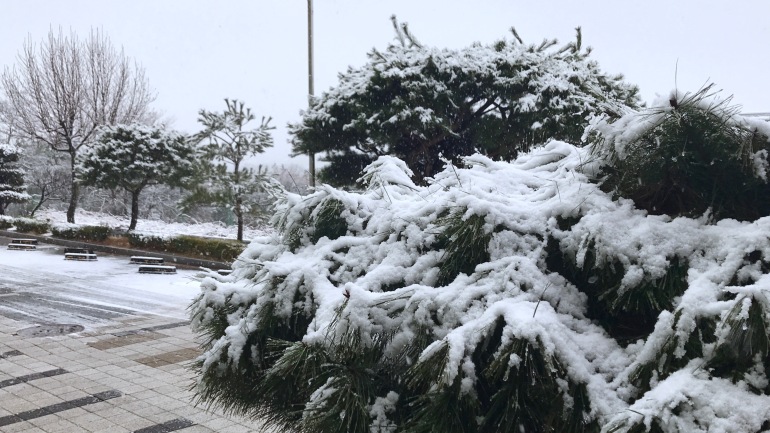 My first class of the day was a grade one girls class. As this is still the first week of school, and they are the new “freshmen” so to speak, it was their first time to see and meet me. Which is always funny.

They were absolutely adorable and painfully shy at the same time. But by the end we had warmed up to each other a little bit and one student even came up after to give me a little present of a sticker with my favorite Kpop idol. I hate to admit how much I use kpop to connect with them, but you know what? What ever works. You gotta do what you gotta do.

When I came back from that class there was, to add to my growing collection, another rice cake on my desk and a whole box of red bean filled little ones on the table next to me.

Whenever a teacher starts at a new school it seems, from what I can gather, customary to bring rice cakes in for all the other teachers.

I was meant to have a grade one boys class after that but when my co-teacher and I arrived all of them were surprised to see us and informed us, loudly and chaotically, that their schedule had changed and this wasn’t English time.

And after a ton of confusion, and hearing about 10 different things from 10 different people, it ended up that the schedule had been changed but no one told us.

Then it was lunch time. I didn’t get a picture of it so I don’t really remember what we had. But I can pretty much guarantee that there was kimchi, rice, soup, and probably another kind of kimchi as well.

I had one more class after lunch, a grade three girls class which went well. Everyone is still in their, “welcome back to school” introduction class so this week has been pretty easy in terms of the classes themselves.

After that class there were two more periods before school ended and I spent the rest of the day working on my master lesson plan for the year. And I’m almost done! Except a few grade three classes to change because our new third graders are actually capable of focusing for more than three seconds put together. And the grade one classes need some more planning because they got a new textbook this year.

But all in all I feel pretty good about where I stand.

Also I ate a ton of the rice cakes that were left on the table. 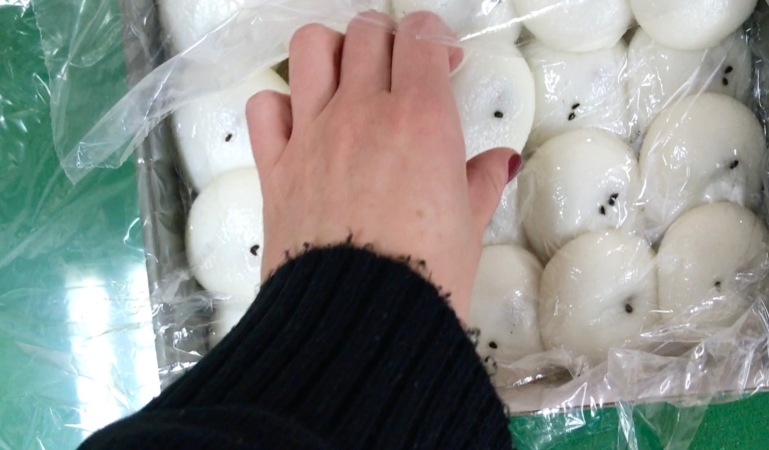 I left school at about 4:30 and came home to a package at my door. Inside were a box of gluten-free pasta and certain kind of oatmeal which I ordered from a specialty food website that delivers cheaply to Korea. 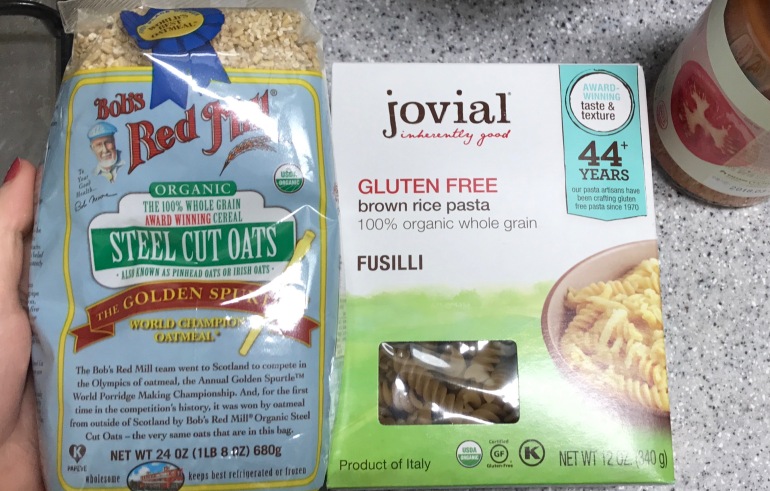 I’ve decided that it’s time to actually confront the fact that I have some kind of food sensitivity because…. well just yikes. And in a country where I often don’t actually really know what I’m eating, I think things have gotten a little worse.

Anyway I relaxed for a little while before going out to the grocery store to get the things I needed to go with the pasta and oatmeal. 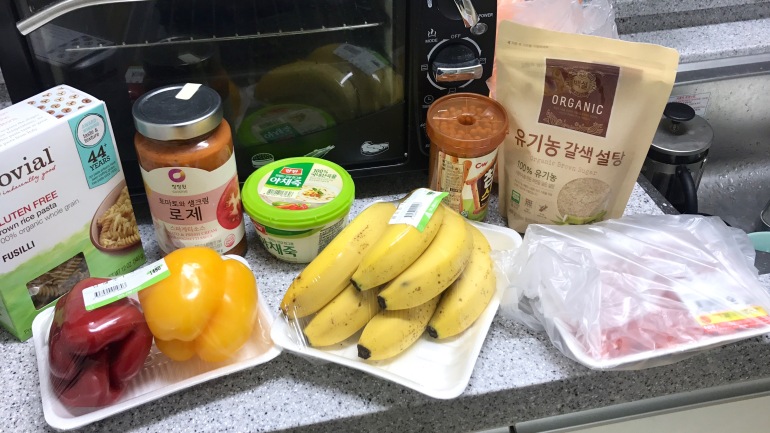 When I got back I made my dinner and then sat down to enjoy it while watching Rogue One.

I must say I was impressed by the gluten-free pasta.

After that I got ready for bed and called my mom. I passed out pretty early around 10:30 and was ready to do it all again the next day.

And that’s it! That’s how a pretty typical day looks when I just stay in after school. For any other ESL teachers out there, does your day look pretty similar?

Thanks as always for reading!