I arrived in Korea two days before school started and that, of course, meant that when Friday morning rolled around I was still recovering from the jet lag. So the morning of the first day of school found me wide awake at 4:30am with plenty of time to chill a little bit before school started. 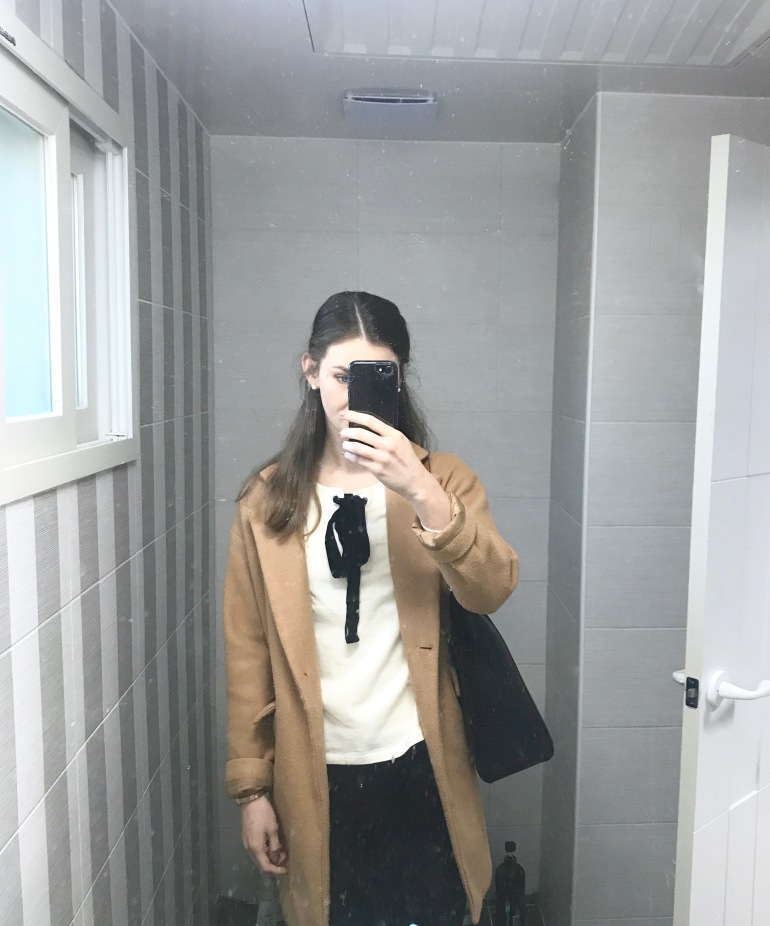 I got ready then left my house quite early to get a jump-start on organizing everything at my desk before the kids arrived and the chaos set in. I had missed the one day where all the teachers come in and move from their old offices in to their new ones because I was still in America. And I’m fairly certain that on that day someone stole my desk chair, set of drawers, and the wooden organizer above all of our desks, because my desk is the only one in our office without them.

Anyway this year I’m back in my beloved grade three teachers office at the desk right across from where I sat last year.

A significant upgrade since now I have a view of the entire office and whoever walks in the door, no one can see my computer screen, and most importantly I’m right next to the table where people always leave snacks. Priorities.

When I walked into the office at about 7:45 it looked like there had been a tornado, or the more realistic possibility that the cleaning had been left to last years grade three students who absolutely could not be trusted with anything.

I went up to the English room and got all of my things to bring back down to my new desk and worked on cleaning/rearranging it until the kids arrived.

By about 8:45 I still hadn’t heard whether or not I’d actually be having my classes today. So I went through a lot of my old papers from last year and got my introduction class ready while doing my favorite thing of watching the latest drama of the day unfold between the kids and their home room teachers.

I know some foreign teachers just stay in their English rooms instead of being in a teachers office but I am so incredibly grateful to be where I am. Being in on the hustle and bustle of the day is one of my favorite parts of the job.

When I did eventually find out my schedule, it was that the home room teachers would take 1st through 3rd period with the kids and that we would start our normal schedules from 4th period.

I had a 4th period class with my new co-teacher (we lost two English teachers, who I miss desperately already, and gained one this year) and it went fairly well. This was a second grade girls class, my baby first graders from last year. And it was weird to think that they’re no longer my littlest ones.

The other weird thing was that they were COMPLETELY silent the entire time. It was bizarre. I know these kids, and they know me, and we all know that this is not how they normally act. I guess they’re being super good because it’s the beginning of the school year and they haven’t quite gotten comfortable with all their home room classmates.

But after a few issues with the TV we got through pretty well.

I came back to my desk to find the first batch of what will from now on be a near constant stream of random rice cakes appearing on my desk. 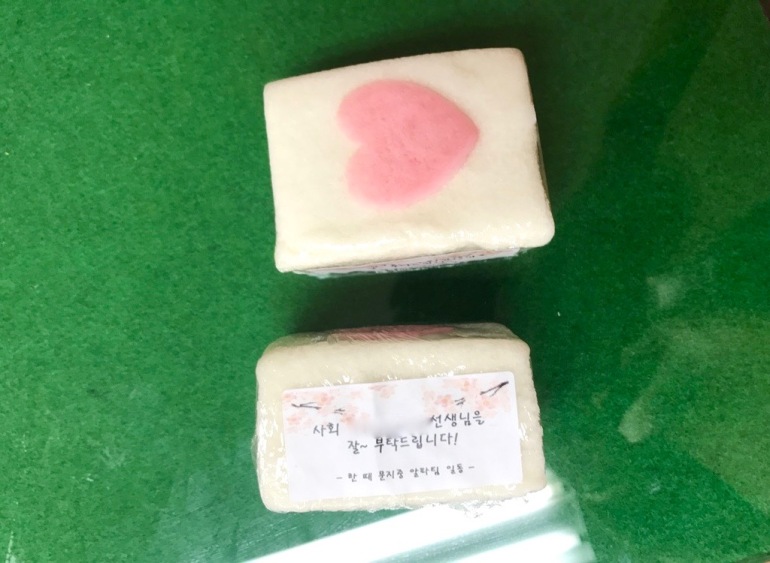 Then it was lunch time. It’s been a long time since I had the school lunch, but it was as good as ever.

After lunch I had one more class, another grade two girls class, with one of my favorite co-teachers. Well really they’re all my favorite, just in different ways. She and I taught pretty much all my hardest classes together last year and I feel like it really bonded us.

The girls were, again, freakishly quiet but I know that won’t last long.

After 5th period it was time to clean the entire school apparently and so the chaotic rushing in and out of kids from the office asking what to throw away and if they could get another trash bag started up again.

Highlights of the day include..

-Seeing one of my favorite now grade three students in the hallway roughly 100 times in the span of about 3 periods. It got to the point that we started saying “Hello again” instead of just saying hi. When I saw him once he promised me to get a 100 in English this year, and another time he said he was waiting for my class. This particular student is one of my favorite combinations of low-level English speaker but with a very cheeky outgoing personality.

-Seeing the new first graders in the hallway whose reactions to me ranged from, “Ohhhhh hello!! Very pretty girl!!” to wide-eyed terror. Both of which make me a little uncomfortable. But I’m sure we’ll get along just fine.

-Walking out into the hallway in the afternoon to see a group of grade three boys playing curling in the hallway with two mops and a roll of tape with a huge group surrounding the players cheering them on. That was easily one of the funnier things I’ve seen in a while.

After we finished up for the day we had a teachers welcome dinner. We went to an area pretty close by the school and had 갈비 Galbi and it was pretty good. Although some of the more veteran teachers from my school were complaining how our teachers dinner aren’t nearly as good as they used to be. I certainly can’t tell the difference. 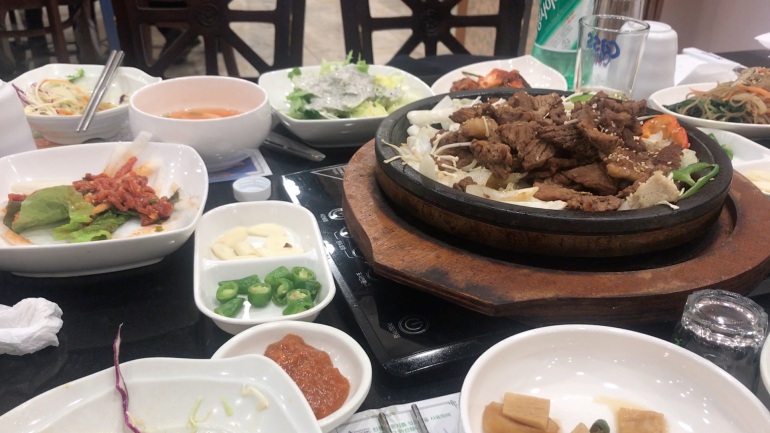 Everything was going along as usual until the music teacher, my old office head teacher, decided he wanted to sing a song for everyone. And then the singing started.

If you’ve read my post about our teachers trip to Tongyeong you may understand why that was immediately terrifying to me. Basically some of the other teachers got drunk at lunch and forced me to sing in front of everyone on the bus and it was probably the most humiliating thing I’ve ever done in my life.

And as if he could read my mind, the music teacher, after picking on several other poor unsuspecting teachers, turned to me in an attempt to get me to come up and sing.

As flash backs of the Tongyeong trip starting filling my mind I vehemently refused and looked desperately at my head English teacher who had rescued me from the “rowdy” bus after what happened last time. And again, to her credit and my eternal gratitude, she looked at him very seriously made an X with her arms and said, “no.”

I hate being a killjoy in these kind of situations, because I know from their perspectives it’s all in good fun and in the name of community bonding. But as an American who holds firmly to a belief and standard that no one, especially your bosses, should be able to force you to do anything you don’t want to do in front of your colleagues, it’s incredibly uncomfortable.

And plus as the only foreigner in the group I feel a bit like a dancing monkey.

Again I know that’s not their intention, but I feel like that anyway.

In the end though, despite constant nagging from my the music teacher, I managed to avoid it. And I felt a little bit bad about refusing until I got into the elevator to leave with a bunch of other female teachers and one of them goes, “Wow, really good job” to me and everyone voiced their agreement.

Anyway, all in all it was a good first day of the new school year. It was a little weird because so much was so familiar; the kids, the classrooms, the noise, and my office. But yet so much was new and different. It felt a little bit like being in some kind of weird alternate reality where everything was just sliiiiiiiiightly off.

Either way I’m very optimistic for the year ahead. And I hope you, whoever’s reading this, will stick around for another year of ramblings from my corner of the grade three teachers office in my favorite little middle school in Korea. Thanks for reading 🙂

8 thoughts on “My Second First Day of School”