9 months in Korea. That’s dangerously close to both double digits and also unbelievably close to a year that I’ve been here.

The leaves have changed and in the past few days the weather has taken a turn for the “absolutely freezing” so I’ve been trying to navigate that as best I can.

This has been a really easy month for me in terms of school. My grade three kids were completely and entirely consumed by sports day for the first few weeks and now I’m completely consumed by their speaking tests.

And to be fair the only classes that ever stress me out are the grade three ones. Grades one and two I can pretty much count on to at least humor whatever I’m doing in class that day.

Even my after school class, all grade three students, has been going really well. I just did a speaking test with one of my girls and to the question, “What is your favorite memory from middle school?” she responded, “your after school class.”

And the irony of approaching my first year here and actually loving a grade three after school class is not lost on me. If you would have told me in my first few weeks here that I would have to teach this class I would have probably had a heart attack. I used to feel like my third grade classes were the part of school I had to endure.

But that is so changed now. They’re still incredibly difficult to teach, but it just took a little longer than the other grades for the sweet students to come out of the woodwork. I had to earn their affection a little bit. The student who told this to me, I really don’t have much of a memory of before this semester. But now she’s one of “mine.”

So maybe the reason that my school life is so good these days, is I don’t have many classes to “endure” anymore. Do I still worry that their may be mutiny in the classroom on any given day? Yes. But I know who will have my back should the worst happen.

Basically I’ve been feeling the love at school a lot these days.

I don’t know exactly why, or if we hit some magical point where I’m no longer scary foreigner teacher, but someone who really wants to know about them in whatever language they can manage. But they seem to be really comfortable with me these days.

Starting from sports day at the beginning of the month I’ve been, for lack of a better phrase, been really feeling the love at school. 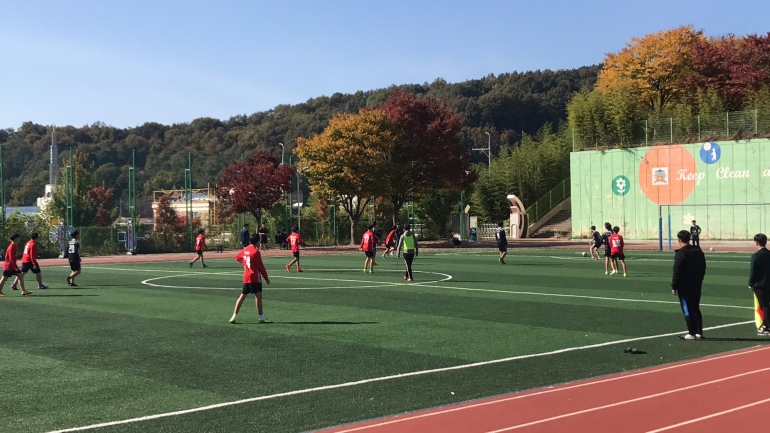 Maybe it was because I could finally interact with them in a non-class setting, but even some of my shy grade one kids suddenly wanted to hug me, and cling onto my arm as we walked around watching the other students practice for the big day.

I’m always careful not to overwhelm them when they approach me on their own, because I don’t want them to think that talking to me means having to think about English a lot and answer a ton of hard questions. But they were so happy and tickled with themselves to chatter away in English trying to ask me all kinds of things.

Sports day itself was awesome as well. The weather was crappy but I have never seen them all so excited about anything. It felt like a community and I felt like I belonged to it.

Community is something that I’ve struggle to find here, but as you’ve heard me say a million times, I couldn’t be more thankful that I can come to work and actually feel better about myself. The more I get to know my kids, the more that I know they are mine.

I think I might have told this story on here before, so forgive me. But I’ll end with this.

After my after school class on Monday I had one of my very quiet boys come up to me and ask if he could ask me a “personal question.” Feeling confident that I could navigate whatever it was, and also excited that this student had approached me, I said, “of course.”

I remember this student from his speaking tests. He always does well, is clearly very prepared and very nervous. He told me before about how he loves history and on this recent test he had told me that he wants to be a “statesman” some day. We both like politics and history, that’s our little connection.

So I can’t say that I was surprised when his question was, “what do Americans think about Mr. Trump.”

(I’ve gotten a lot of questions about Trump at school from kids flippantly as a joke, to which I try to respond seriously. But this was spoken out of genuine curiosity and said more respectfully than the way even many Americans, myself included, talk about our president.)

We had a really good little conversation and I asked him about how Korean people see Trump, and what Koreans think of their own president. And I could see how simultaneously nervous and excited he was to be having the conversation. Eventually it was over and as we were saying goodbye he said to me,

“Teacher I don’t English well, but you listen well.”

I think I managed something about how I love to talk to students and I will always listen.

But then I went back to my office and tried not to cry.

Because that is all I want them to remember about me. That no matter what they said I listened to them well. And when I can actually manage that, when those little moments come out of nowhere, I’m proud of myself. I don’t do everything well as I teacher, but I love them a lot.

School’s been awesome lately. Here’s hoping it’s all up from here. Thanks for reading!