After a week of cafe hopping in Seoul, another 8 days of EPIK orientation, and generally way too long living out of my two messy suitcases, I am finally settled into my new apartment!

But let me back track just a little bit.

About this time four days ago I was frantically preparing my lesson demo with my partner in a classroom at the orientation venue. Our fake students were meant to be elementary 3rd graders and the title of our lesson was, “Put on Your Shoes.”

It was difficult to plan for and I’m not sure if that’s because I felt like I hadn’t slept in 6 days or because it’s just difficult trying to figure out how to teach something when your students don’t understand complete sentences.

Either way it made me thankful to have been placed with middle schoolers.

The next day we gave the demo in the morning, we were luckily one of the first groups, and then got to sit back and watch everyone else for the rest of the day.

We were all solidly mediocre and completely awkward. But we all survived and will live to teach another day.

After that it was time for our meeting with the Office of Education to officially sign our contracts. All of us who are placed in my city were herded into a room and handed a huge packet of papers. They talked through the contract with us as we signed, and signed, and signed about a million pages. Or at least it felt like that.

Then two EPIK teachers who are living in our city gave us a little presentation about what life is like here and some useful resources.

From there we went to the closing ceremony.

They had a bunch of little good-bye speeches, a video, and even a performance from the Kpop class. Which was way more legit than any of us were expecting.

Then we headed to the farewell dinner, and back to our dorms to pack up all of our luggage. Once that was all finished we finally, after 8 days at the orientation venue, headed out into the city to celebrate our new freedom.

We first stopped at a 7-11 so everyone who wanted to could glory in the fact that there are no open container laws in South Korea and so standing outside a 7-11 to drink is perfectly acceptable. Or at least legal. 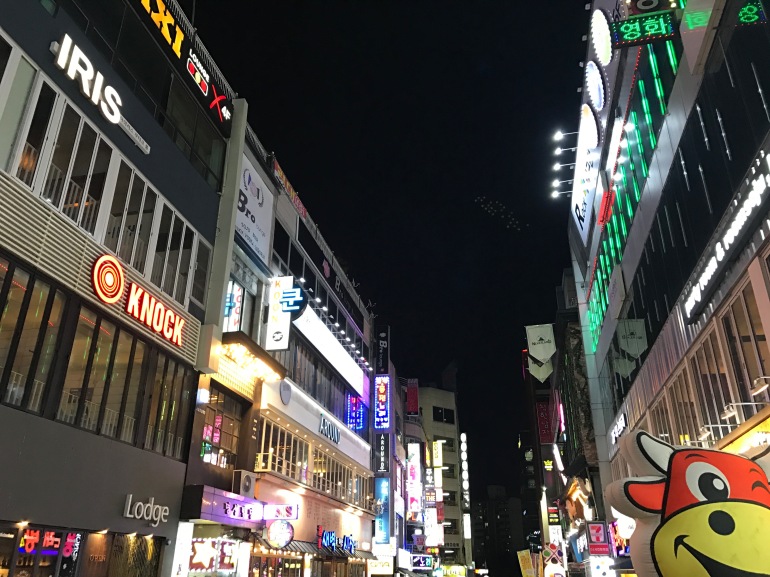 Then we went up to a bar that’s known to be a foreigner spot. It was really chill on the inside, probably because it was a Monday night, but seemed like it will be a really cool place for live music and hanging out.

However the intensity of week was still weighing heavily on me and by the time about 10:30 rolled around I was ready to fall asleep. So me and another friend grabbed a taxi back to the dorms and called it a night.

The next morning we all said goodbye before loading up onto our busses to head to our respective cities. Luckily enough for me, orientation was in the city that I will be living in, so our bus ride was only about 15 minutes.

Then we arrived at the Office of Education for a ceremony where we meet our new Co-Teachers. We were all lined up and then our names and school were called one by one. Then the Co-Teachers would stand up from the crowd and come to pick us up. It felt a bit like being adopted or something along those lines.

Finally my name and school were called and I got to meet my Co-Teacher who will be my liaison between my life in Korea and my school. She was super lovely and once the ceremony was over we put my suitcases in her car and headed to my apartment.

This was what I was most excited for out of the whole day. At long last I would finally be able to really unpack and settle down. I had my expectations set pretty low, because EPIK apartments are a mixed bag. It’s up to your school where and how you live so people end up with a really wide spectrum of situations.

I can describe my apartment in the words my landlord used when I met her, “I think your school must be very generous.”

My apartment is so much more than I was hoping for. It’s clean, and updated, and honestly a lot more spacious than I was expecting.

don’t get me wrong, it’s definitely a Korean style apartment. Complete with a wet-bathroom and only two burners for cooking. But I actually have counter space in my kitchen, enough room in my bathroom that the water doesn’t get all over the toilet and cabinets, and tons of storage space, all of which are luxuries here.

Everything is white and minimalist. Even the bedding that my Co-Teacher picked out for me is exactly my style.

This will probably be the first and last time I show pictures of my new home, but just to give you a sense of what I’m talking about, here you go! I’m a very happy camper. 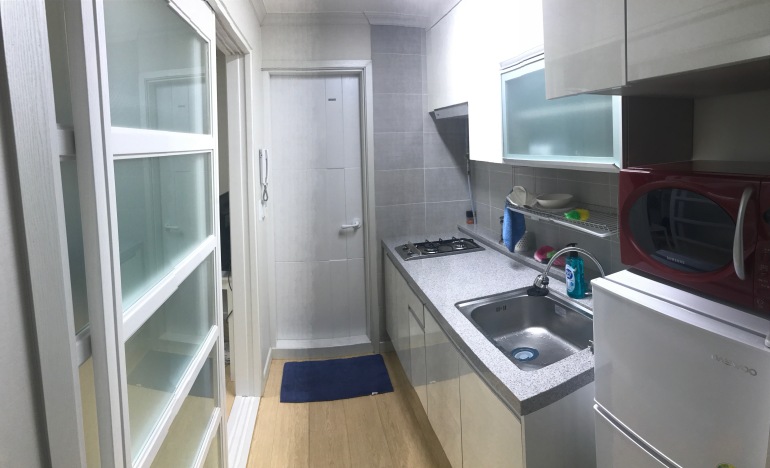 My only issue so far has been working out how to use the hot water, and that my computer doesn’t have an ethernet port so I need to go buy a wifi router.

So after she brought me to my apartment we met up with my new landlords. They’re a super hip young couple who both speak english fluently. Which I imagine will save me many headaches in the future.

Then we left the apartment to visit my school. She showed me around the different offices and where my desk will be. A few of the teachers were there but as it was a holiday the place was almost completely empty. I’m sure I’ll be thankful for that when I’m trying to find the office again tomorrow but also navigating around 700 middle schoolers.

After we finished at the school she took me out to lunch for Mandu.

It was absolutely amazing. However I was still so incredibly exhausted that making small talk was getting more and more difficult by the second.

After we ate she took me to do a little bit of shopping for my apartment and to buy some trash bags because the garbage system is really complicated here. I’ve yet to make sense of it but I need to figure it out asap.

Then she dropped me back of at my apartment and said goodbye until I see her at work.

I was so thankful for all of her help and equally as thankful to finally be sitting alone in my apartment, without having to talk or even think.

The exhaustion was so heavy that I actually though I might be getting sick, but unpacking my things and a cold shower (couldn’t get the hot water to work at that point) helped me to start feeling like a human again.

I’m the kind of introvert who needs to be alone to recharge even after one long day of interacting with people. It’s been a solid two weeks since I’ve been alone at all, and so to say that this was refreshing would be an understatement.

So that night was spent doing the little things that my old routine used to consist of and slowly but sure I started to feel like myself again. I fell asleep around 10:00pm.

That brings us up to today. So this morning I went out to meet a friend at EMart to do a little more shopping for our apartments. It was my first time to use the bus in our city and it all went very smoothly and no mistakes were made.

I found her at the entrance and we headed inside. We shopped around for a while but as we’ve only been here for one night it’s hard to know what we actually need. I picked up a few little things, the most important bring a French press because my life is not complete without one.

Then we went to find a restaurant for lunch. We ended up at this tiny little place that sold what I can only describe as like cheap Korean comfort food. Maybe it’s called school food? I’m not exactly sure.

But what I do know, is that I had my first official conversation in Korean with the guy who was working! And I am so freaking proud of myself. It went like this.

“Is the Donkatsu Curry spicy?”

“It’s just a little bit spicy. Can you eat Kimchi?”

“Then it should be fine.”

“It’s not too spicy right?”

And we said goodbye.

I realize that this is about as simple as it gets, but I actually understood him and he understood me and we communicated information! I’ve never properly done that in this language before!! I’m quite proud of my self and thankful that this whole past year of studying Korean hasn’t been all for nothing.

Then I came back home and made my lesson for school tomorrow. I was told to prepare an introductory lesson about myself and my home country. 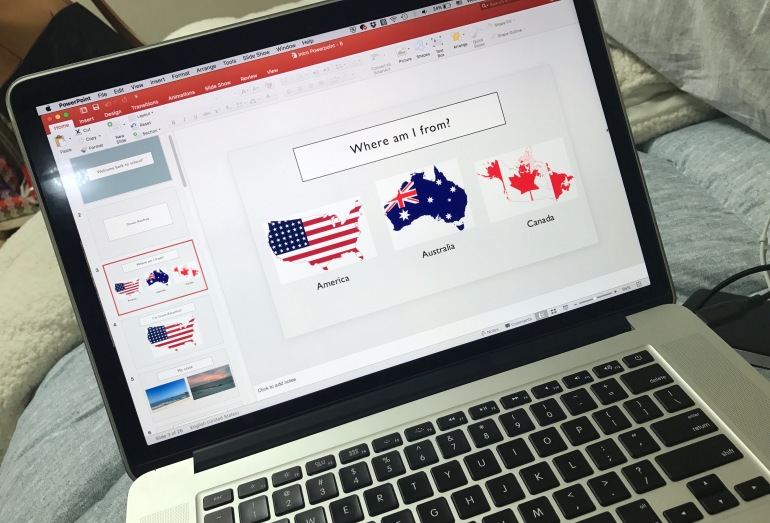 I’m absolutely terrified to walk into school tomorrow but I feel good about my lesson and I know that there really isn’t anyway to prepare for whats going to happen. I’ve just got to take it as it comes and be ready for anything.

My motto has been, “You can have a panic attack tomorrow.” And then of course saying it again to myself the next day. So far so good.

I only have to teach two classes tomorrow so I’m not entirely sure what the other 6 hours of my day will be spent doing but I suppose I will find out pretty quickly. I’m planning on bringing as much stuff as possible to do in an attempt to look as busy as everyone else.

Reality beings tomorrow. I’ll update on how it goes as soon as possible!