Brace yourselves ladies and gentlemen this is going to be a long one.

September was eventful to say the least. In the beginning of the month at school I was enjoying the accidental success of a particular lesson for my grade one classes that I expected to flop but actually ended up going really well!

Their expression from the book for the week was, “Have a nice trip!” But for the life of me I couldn’t come up with some kind of activity of game to get them practicing the expression. Someone tells you they’re going on vacation and you say, “have a nice trip.” That’s all there is too it.

In the end I decided to have the make travel posters in small groups to advertise for a fictitious vacation and what they were going to do on that trip. In the end we hung them all up on the board and voted for the trip we most wanted to go on.

It was kind of a throw away idea. Born out of desperation and the knowledge that having my grade one students drawing anything will invariably take the whole 45 minute class.

But what I didn’t expect was how creative and well they would do! The girls in particular really blew me away! 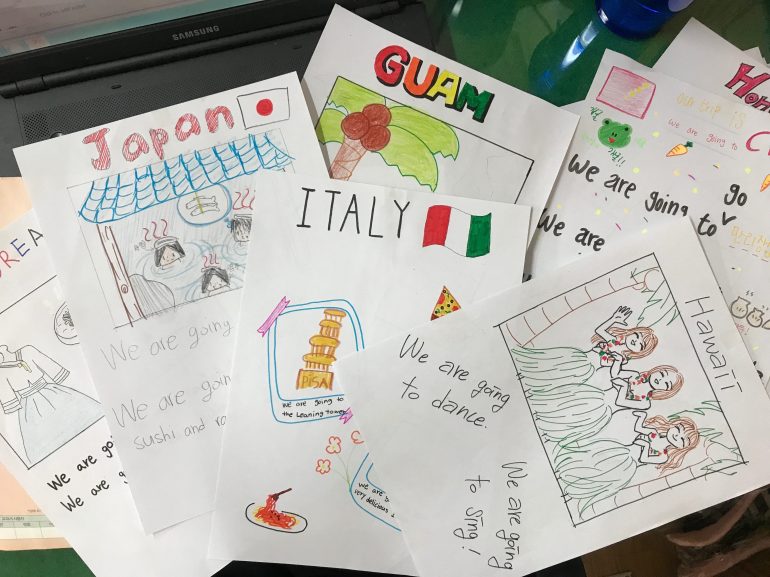 It was a fun week and I’m still trying to figure out somewhere I can hang the best ones up around the school.

Some other highlights of the month include…

And the return of a reoccurring character in my life. Polar Bear, the anteater. Who wears a one piece bathing suit apparently.

The main event of September though was of course my MOM coming to visit!!!

Living abroad can be hard sometimes for a lot of different reasons. But one of those is that it’s weird to live a life so completely separate from all the people you love back home. No one knows what your house, or your city, or you neighborhood looks like. They don’t know the food you eat everyday or the buses that take you throughout the country.

And so having my mom come here and be able to experience a bit of the life I live everyday was really important to me. I know it was no small thing for her to come all this way, but I think it was a trip that we will both remember as something really special. Love you mom, thanks for coming ^^

Our journey started off with me in Daejeon. After a Saturday of cleaning my house I headed up to Seoul to check into the hotel we would be staying in because her flight wasn’t going to be arriving until 4am Korea time.

I checked into the hotel around 8:00 and had about 2 hours to relax there before I needed to head off to the station to catch a train to the airport. The unfortunate thing was that because the airport trains don’t run very late, I would have to arrive at Incheon airport around 11 and then wait until 4am for her flight to get in.

But equipped with a new game for my Nintendo Switch, aka the love of my life recently, I sat in a Lotteria (Korea’s equivalent of McDonalds) for about 4 hours.

This was not the first time I’ve been in Incheon in the middle of the night, stuck with nothing to do. Oh no, Incheon and I, in fact, have a long history of my being held there against my will. I have a favorite spot to sleep when that happens, downstairs by the trains. I’ll just leave it at that.

However this time around I was waiting in the brand new terminal 2 and I must say it was beautiful.

Even the bathroom looked like a fancy hotel! I was bored, okay? Don’t judge me too much.

Eventually 4 o’clock rolled around and finally she arrived!! I stood out in the arrivals area waiting and until I caught a glimpse of her coming down the escalator.

We had a very lovely, if not a bit tired, reunion and THANKFULLY the trip had not destroyed her completely.

It does that to me. I do not do well on little sleep.

We headed down stairs to the bus departure area and had to wait for almost hour to get on the bus that would take us back into Seoul. That bus ride was also about an hour so when it was all said and done we ended up getting back to the hotel around 7:00 in the morning.

We tried to sleep for as long as we could but knew that getting up and moving was probably the best way to kick the jet lag for her. So around 12:00 we left the hotel and went down to the Sinsa/Garosugil area where my church is. We walked around, looked in some shops, and got a coffee before going to church at 2:00.

After that we got a quick, but delicious, bite to eat and then headed back to the hotel. Both of us were struggling to stay awake by 6:00 and I think we managed to make it to about 8:00 before we passed out.

The next morning we started off slow with a really love room service breakfast. 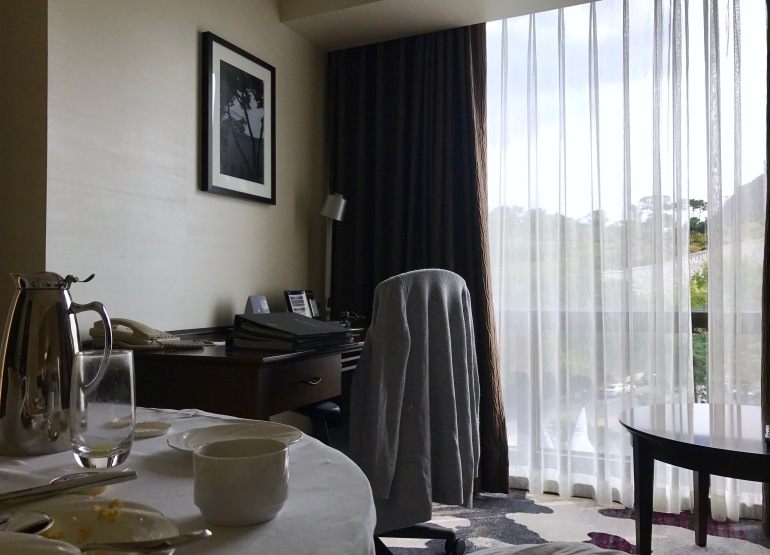 The view from our hotel overlooked part of the fortress wall that goes through Namsan park so that was a pretty perfect way to start off our first day in Seoul.

This was to be our “traditional Korea” day and so to start off we hopped on a bus towards Seoul’s most famous northern Palace, Gyeongbukgung.

Public transportation is always a really great way to not only see lots of different parts of a city but also get a real feel for how regular people usually get around and live their lives.

We arrived at Gwanghwamun and first stopped by the statue of good old King Sejong the man attributed with every good thing that has ever happened to Korea. I kid. He is credited with creating the Korean alphabet though which is widely considered to be the most “scientific” alphabet in the world.

When we got to the palace we were pleasantly surprised to find that it was free because of the Chuseok holiday! That did mean, however, that the crowds were a little bigger than I expected, but nothing too terrible. 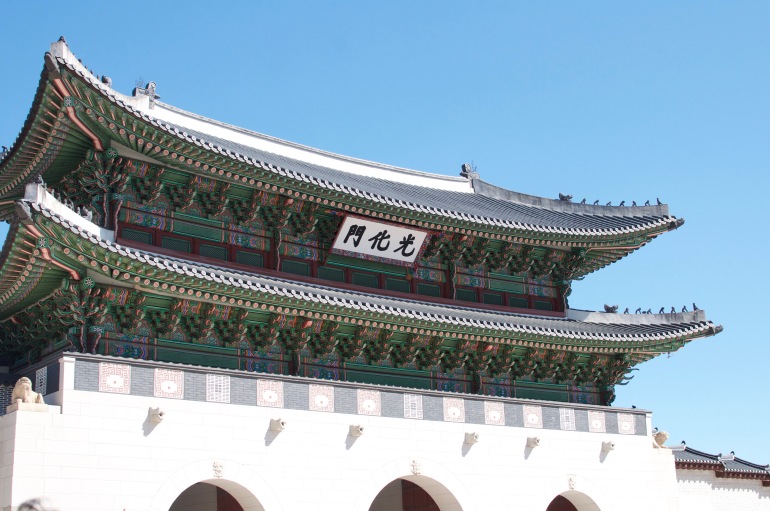 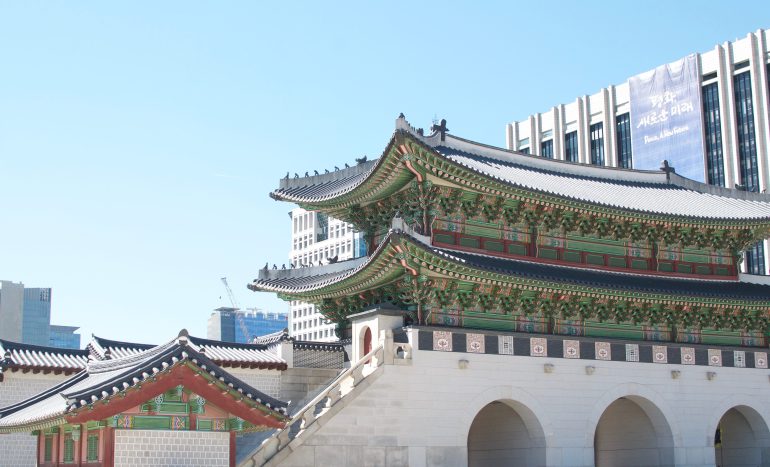 The sight of the thousand-year old gate with the huge banner for the South/North Korean summit talks hanging on the building behind it was a pretty cool thing to see. 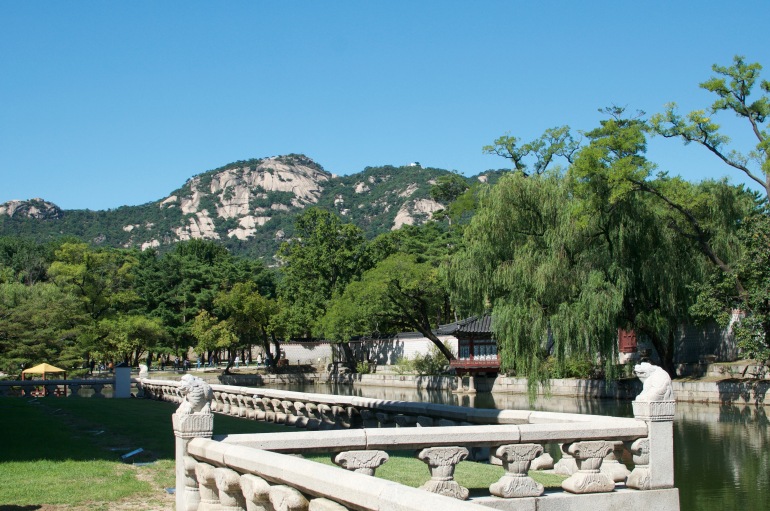 We walked around for a long and time and I tried to take in some details that I might have missed on my other visits to Gyeongbukgung. 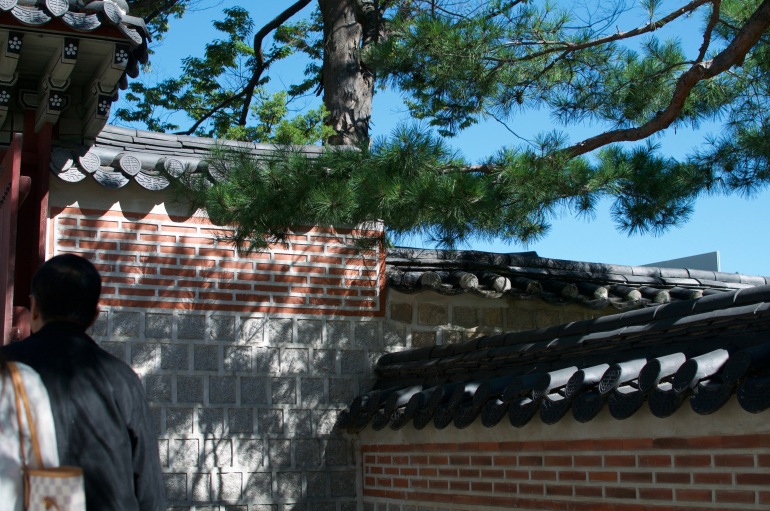 I personally love walking around the palace and it was nice to finally be there on a day with nice weather. The first time I went there it was in the brutal dead heat of summer and the second time was when my sister visited and we were as bundled up as we could possibly be to keep from freezing.

This day was perfection. Bright blue skies and temperatures in the low 70’s. Couldn’t have asked for more!

After the palace we went to Samcheongdong to walk around to see the shops and the traditional Korean house village.

Bukcheon Hanok Village turned out to be a little bit more of a hike than we anticipated but the view’s were lovely! 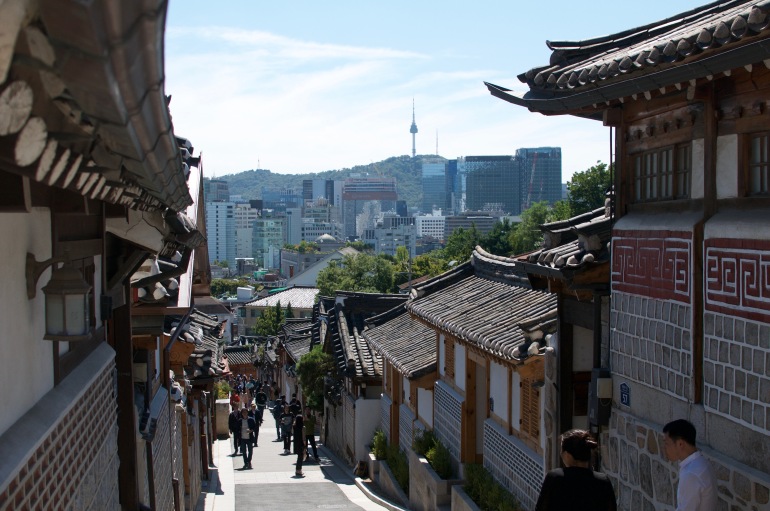 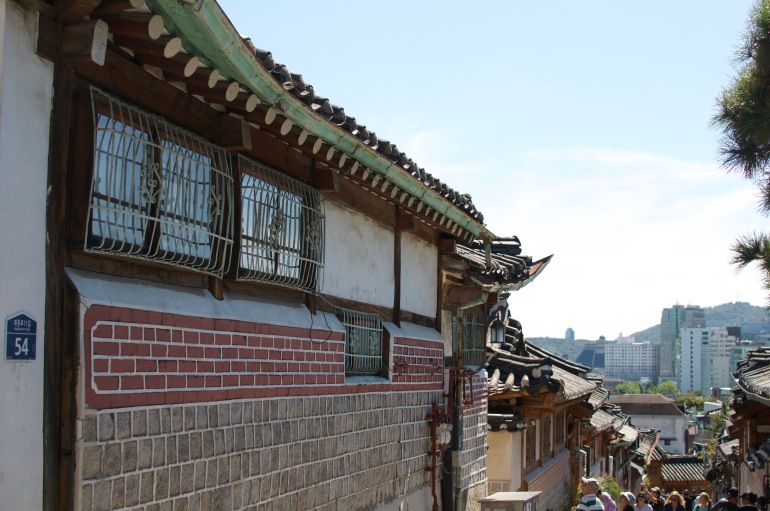 After seeing all the hanok houses we went down to Insadong where there are lots of little traditional shops and most importantly my favorite Korean street food of all. Hotteok. 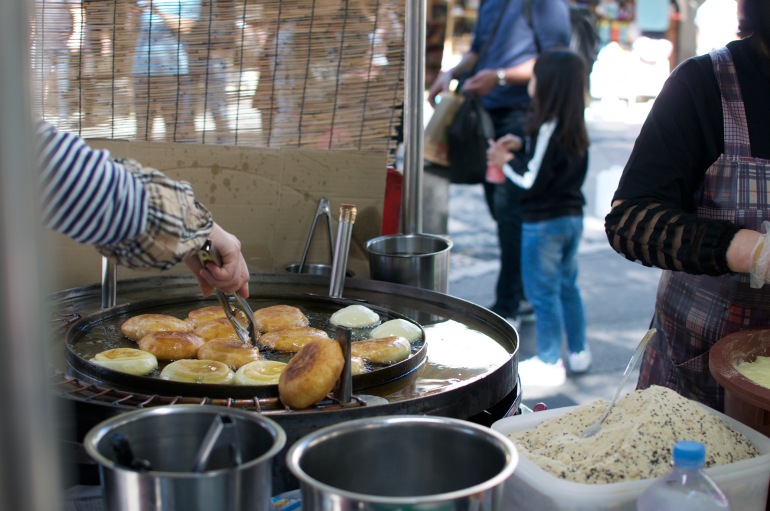 After that we walked around a little while longer before heading back to the hotel to rest.

For dinner we had a really amazing dinner of samgyupsal (Korean BBQ) but I was so caught up in it that I didn’t take any pictures. I did manage to pretty seriously burn my knee on the grill beneath the table though.

The next morning we went to the Korean National Museum. 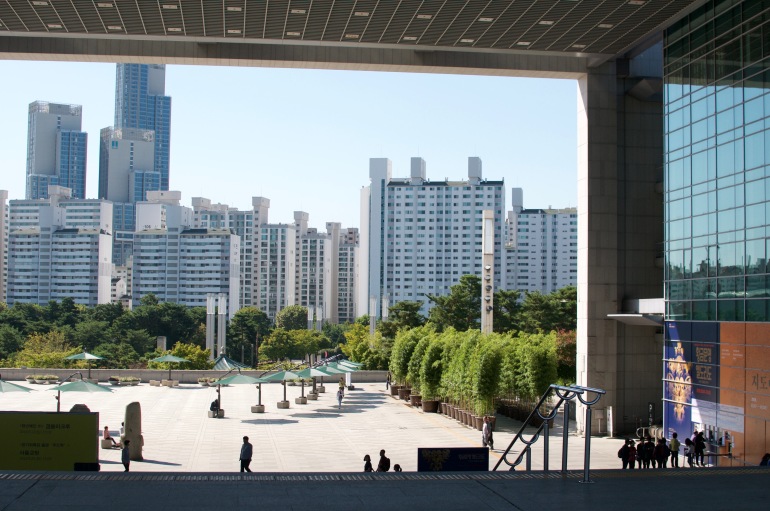 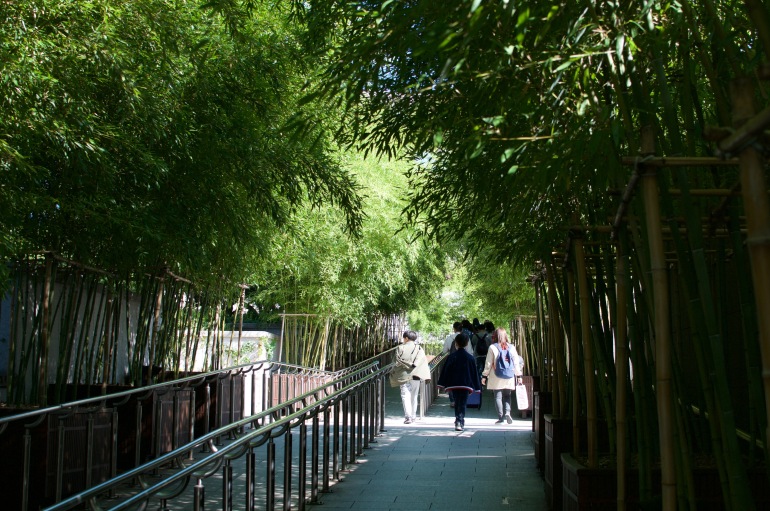 Inside they have all kind of artifacts to maps to art. It’s a really cool space. 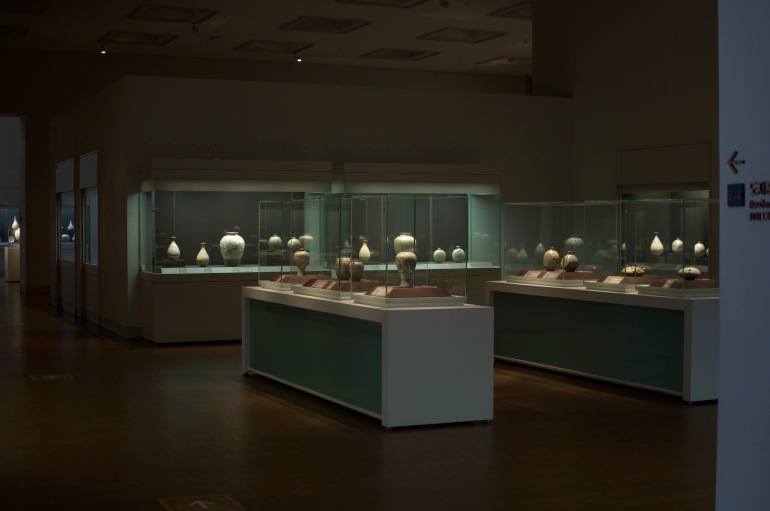 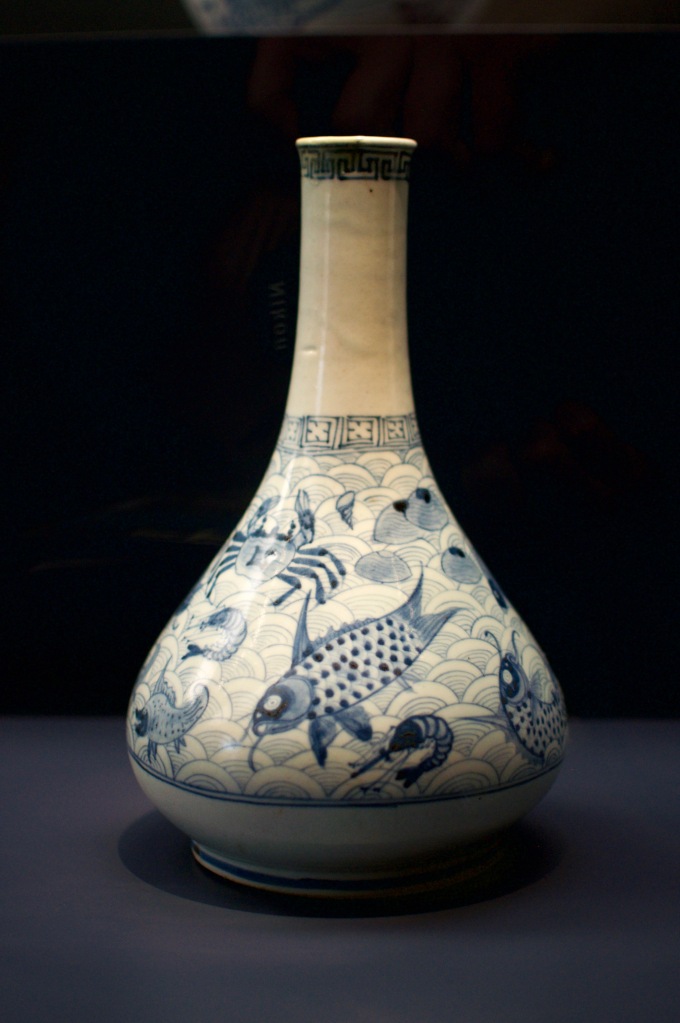 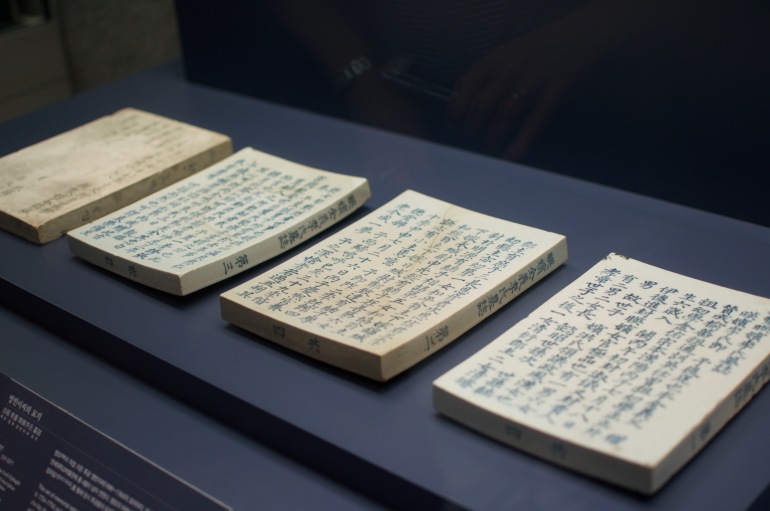 After the museum we went to Itaewon, the international food hub of Seoul, in hopes of finding some good food. We ended up getting pizza and chilling at a cafe with a beautiful porch for a while.

Once we’d finished up eating we went back to the hotel to get our bags and head to the train station. Finally we were off to Daejeon, my Korean hometown. 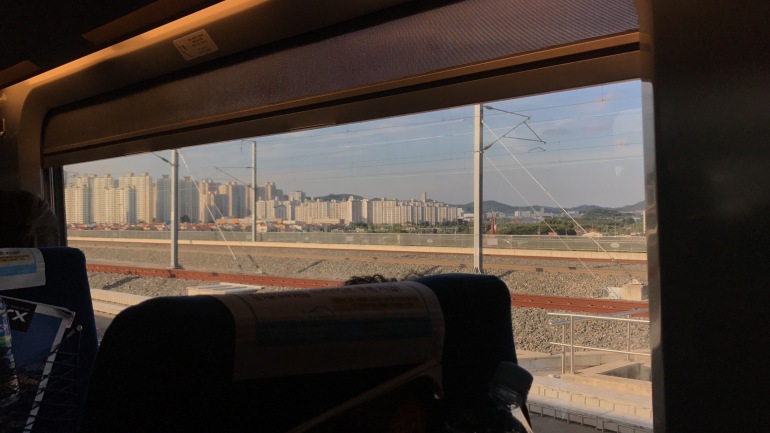 We took the KTX for about 50 minutes and got off at Daejeon station. Once we’d checked into my moms hotel we came back to my place so that she could finally see my house and also because we were both ready for a home cooked meal.

That night we just relaxed at my place and looked through all of our pictures from Seoul.

The next day we got up pretty early and headed to Hanbat Park for a walk. 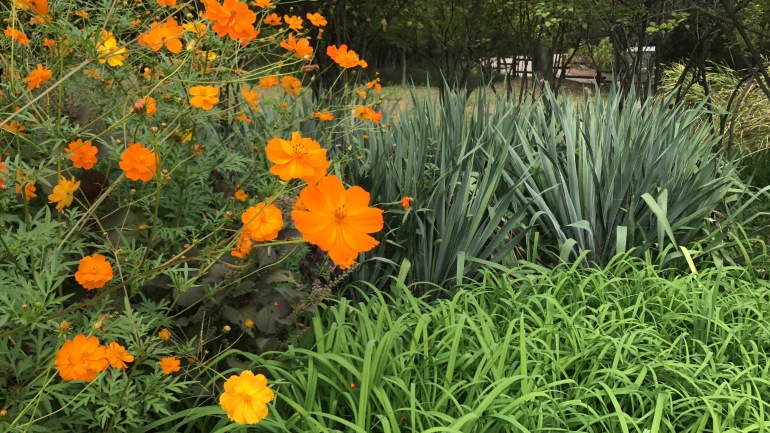 That night ended up being probably my favorite part of the entire trip.

We went for dinner at a nice restaurant in Yuseong called Bomyung Garden.

The food was super good. After that we went across the street to one of my favorite cafe’s in Daejeon called Seven Factory Moment that has a great view of the city. 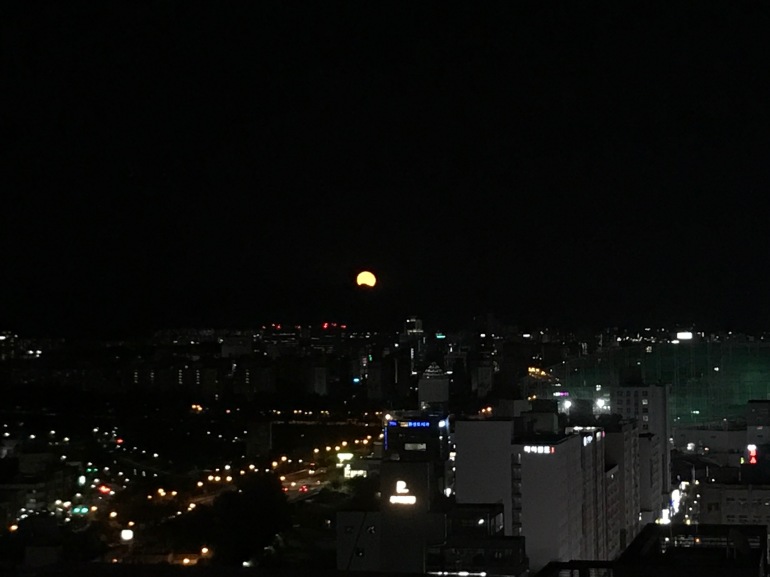 We sat outside on the terrace, had a drink, and talked for a long time until it was dark and suddenly the moon appeared, big and red, over the horizon.

The next two days I had to work unfortunately, so we didn’t get to meet up until dinner time. One night we had dinner with my co-teachers and the next with my group of friends.

On our last official day in Daejeon we went down to Eunhaengdong. 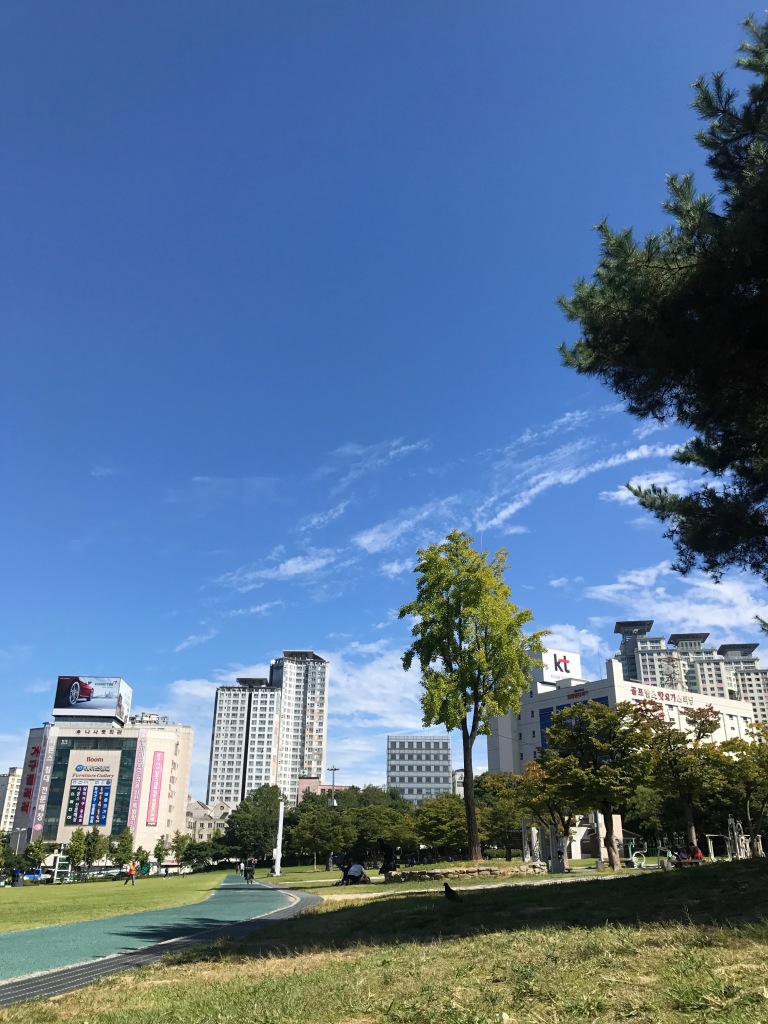 First we stopped by Seodaejeon park just to relax and enjoy the nice weather for a bit.

Then we went to Sunshindang, Daejeon’s famous bakery and sat in a cafe for a bit. 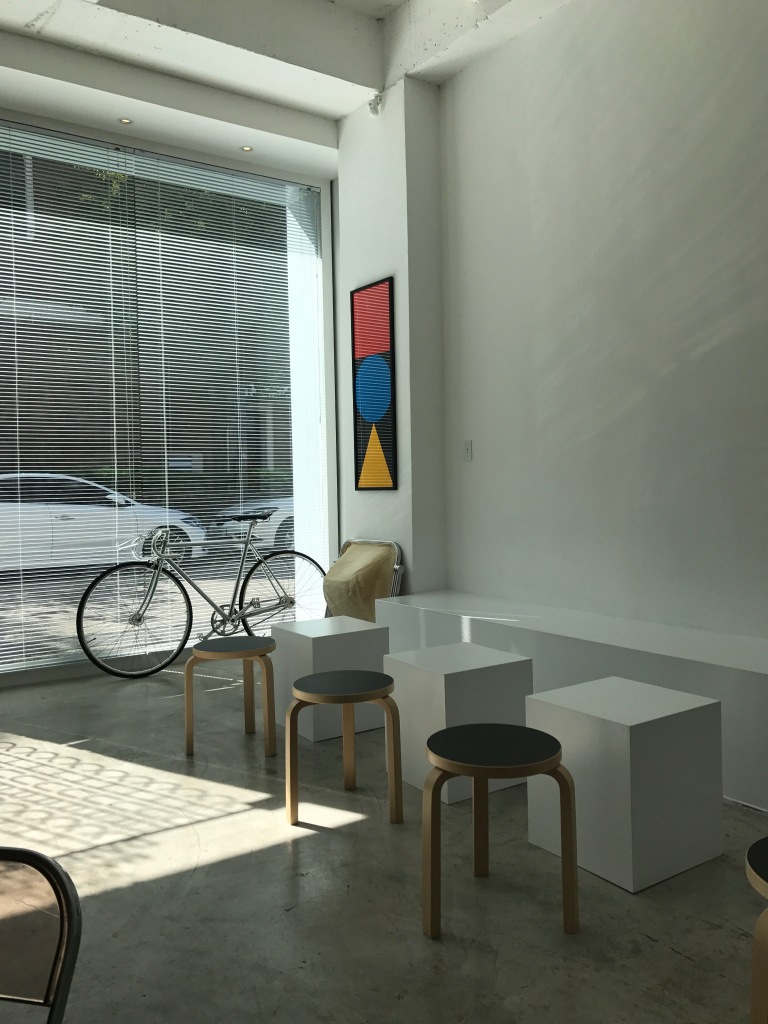 For her last night in Korea we had some pretty typical Korean food, bibimbap and dwengjangjjigae.

Our time in Daejeon was much less exciting than in Seoul but a lot more meaningful, for me at least.

Having her visit so many of the places that will live in my memory forever was really amazing. Daejeon will always be the first city I moved to after college, this is the first proper adult job I’ve had, and my first time to live completely alone. And now when we talk about these things on the phone, she’ll know exactly where I’m talking about.

Mom, thank you for making the trip. It was more important to me than I can properly put into words here ❤

For everyone else, thank you so much for reading this! And for sticking around this blog. I love you guys too. Hope your September was a lovely as mine!