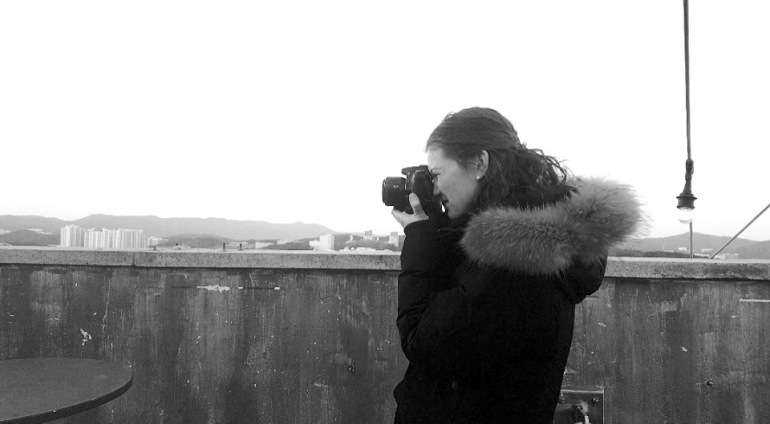 My relationship with my camera began in late 2010, my sophomore year of high school. Although by that time it had already been on the market for about 3 years, which now in 2018 makes it officially 10 years old.

I love this camera. It has never once felt its 10 years, which for something that uses a battery and is made of very finely tuned electronic parts is incredible. That goes to show exactly what you’re paying for when you buy a DSLR. It’s worth it. Eight years of wear and tear later and it still works just as well as the day I got it.

It has been with me to eleven different countries, four continents, four years of university, and started my new life with me here in Korea.

This is the camera through which I learned everything that I know about photography. When I worked for a local photographer throughout high school it was with this camera that I put everything she taught me into practice.

We understand each other. I know exactly how long of a shutter I can hand hold without getting blurry images, and the extra milliseconds I can manage if I hold my breath.

I know how far I can push the ISO without getting too much noise.

I know when to disregard the internal light meter and when to trust it.

Basically I love this camera. And after eight years, I think we work very well together.

So I wanted to make this post to look back at about eight years worth of my photography.

These three photos are from a little day trip that we took pretty soon after I got my camera and they are some of the first images that I was ever really proud of.

They’re very representative of how a lot of my photography was in the beginning. Super high contrast, very noisy, and suffering a little bit from the lens I was using at the time.

But part of my looks at them and thinks, “Why don’t I take stuff that looks like this anymore?” They have a feeling, one that I haven’t seen in my photography in a while. 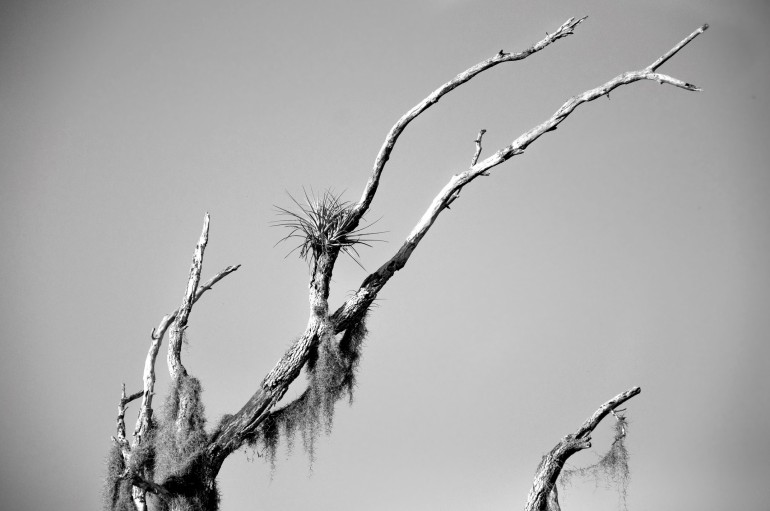 Throughout high school, while was learning about photography and constantly trying to find new things to photograph, we lived about 5 minutes away from the beach. And so often I’d decide to just go down there around sunset and see what I could get. Sometimes it was the same boring stuff and sometimes I got lucky.

When I look at these it makes me miss this time in my life when I was taking pictures almost everyday. And also living close to the beach. I miss that a lot.

These photos are still suffering through my kit lens that I hadn’t changed yet. You can see it in the noise, the barrel distortion, and the vignette-ing when the light is difficult. It’s particularly bad in the last photo. 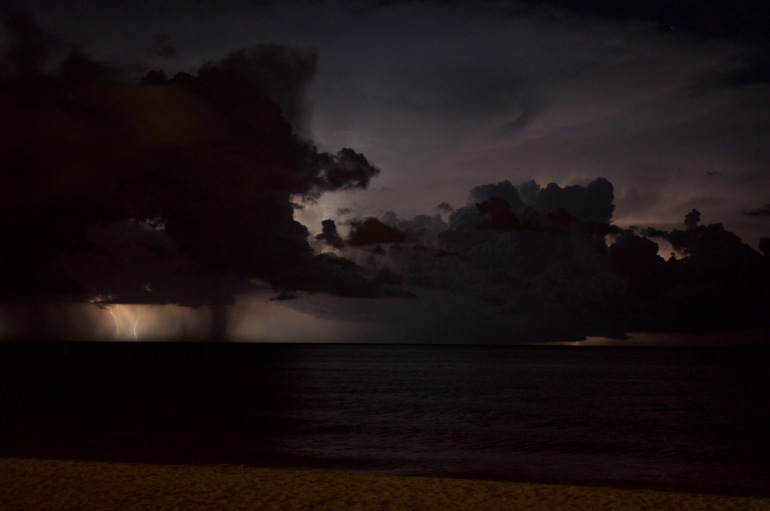 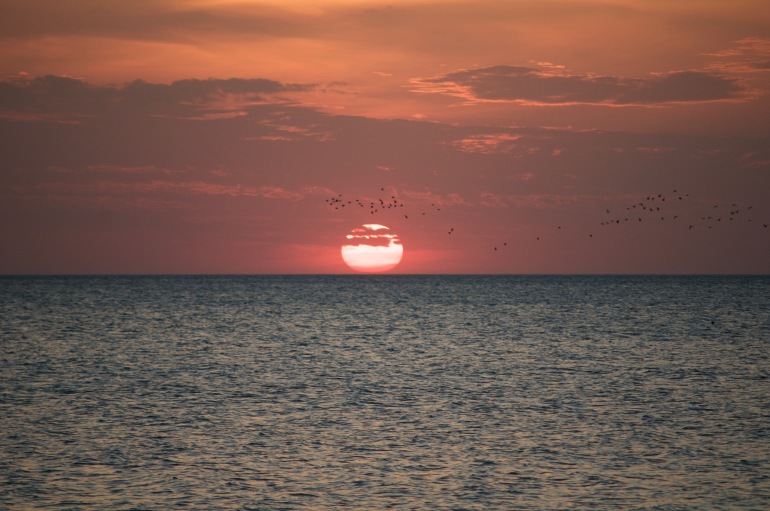 Then in my last year of High school I took a trip to Paris. These photos were the beginning of my travel photography. And again when I look back at them it’s interesting to see how much my style has changed. I was still using the long zoom kit lens, so there are way more zoomed in detail shots then I usually go for now.

The first photo of the white hotel I have always loved. For no particular reason.

The second I loved because I thought I was being so original for getting shots in the Louvre other than of art. Plus the lighting was really pretty.

And the last is one of those shots that has a lot of feelings for me. We were on the train, eating a baguette, I was with some of my closest friends, and suddenly out the window was this sunset.

I wish I could relive that moment again with the lens I have now, but something about the muddy shadows and wonky colors seems right for what it was.

University didn’t inspire too much by the way of photography. I was busy, when I think about it now I was too busy. But I loved every second. However I did not have much time to take pictures.

I did, however, finally get a new lens which even in this first image you should be able to tell. My beloved 35mm f1.8 that I still have on my camera to this day. This is probably where my love of way too blurred backgrounds comes from. Bokeh is good, but I can get carried away sometimes. 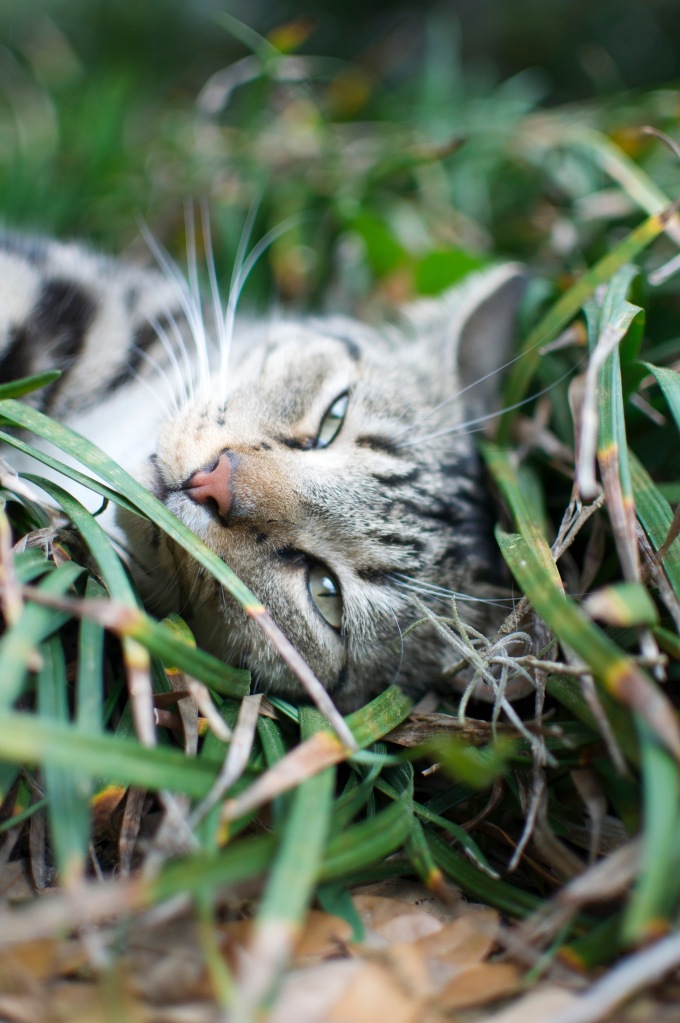 The only real photography that happened while I was in college was during my study abroad trip to Peru. That trip changed my life in a lot of ways, but it also really shaped how I take pictures. It was the finishing seal on my movement away from super contrast-y bright images to more realistic ones.

In this first photo one of our classmates had broken her ankle while on the trip and was taking a horse back down the mountain we’d just climbed. I did a whole post about this night because this sunset was one of the most special things I’ve ever seen. You can check that out here.

The second photo I’m not really sure why I love. I think it’s that the image looks the way it felt when I took it. The trees felt tall, the path was narrow, and our teacher with that ridiculous thing on his head just made it feel like an adventure.

And the last picture. If you’ve been around here for a while I’m sure you’ve seen this picture. This is my favorite photo that I’ve ever taken in my entire life. I have about three shots from that particular moment. One in which you can see a little bit of the wake from the boat I was on pushing against the reed island. I go back and forth about which one is better, but I think I like this one best. The sky that day was unimaginably blue.

Then that brings us up to this year. My first year living in Korea. While I didn’t do as much as I would have liked by the way of saving money, I did do a lot of traveling. I feel like I’ve used all these photos too much around this blog so I’ll try to keep it short and show only the ones that I feel are indicative of my kind of newish travel photography style.

And that is, or at least what I try to make it, simple and clean. I use only my 35mm and no flash. So there are no super wide or super zoomed photos. The f1.8 makes it possible for me to shoot in low light, something I’m trying to get better at, and also to get those blurry background when I want to.

I went to Japan on two separate occasions and I know that it won’t be my last time there. Japan is so cool. And it is so much fun to photograph. 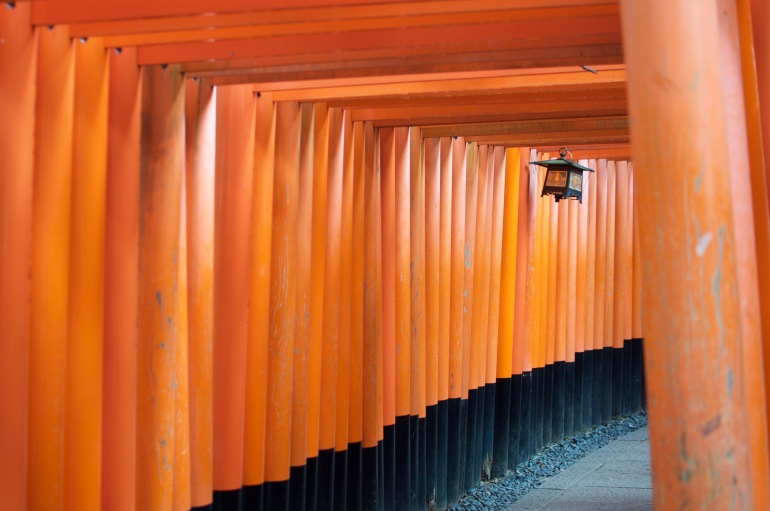 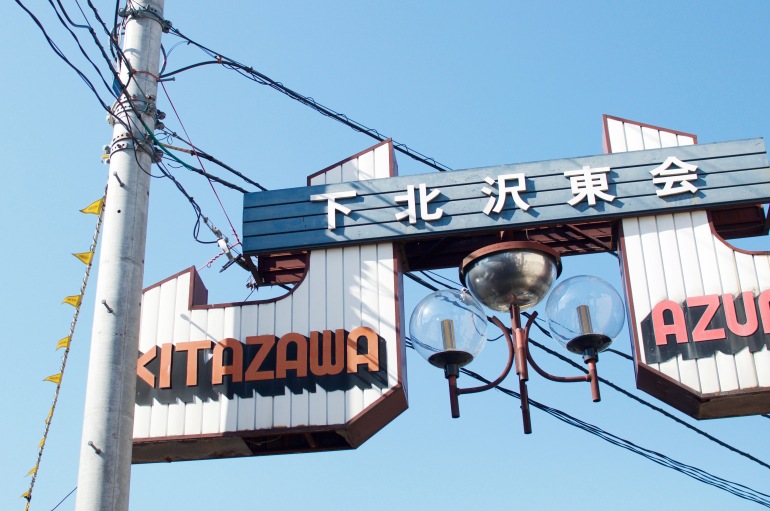 Then there was Singapore.

The first photo I love because of the colors. The still visible sunset behind the very illuminated buildings works so well. I remember we were literally running to make a show that we were late for but I had to stop and take this picture. And I’m glad I did.

The next one I knew I was gonna love as I was taking it. I had all of a few seconds to get that shot because we were on the hunt for lunch and I wish I’d had more. Because the rain was really cool. Again I think it captures what it actually felt like to be there.

The next with the cow and statues is one that I have a tricky relationship with. I love the photo. But it’s not what it could have been. If I’d had a wider lens, or had the sun been in a different spot it could have been perfect. But as it is the colors are hard because the foreground has to be underexposed to accommodate for the very bright sky.

And the last one I like just because of the contrast between the dark cool street and the warm light coming from inside the rug store. 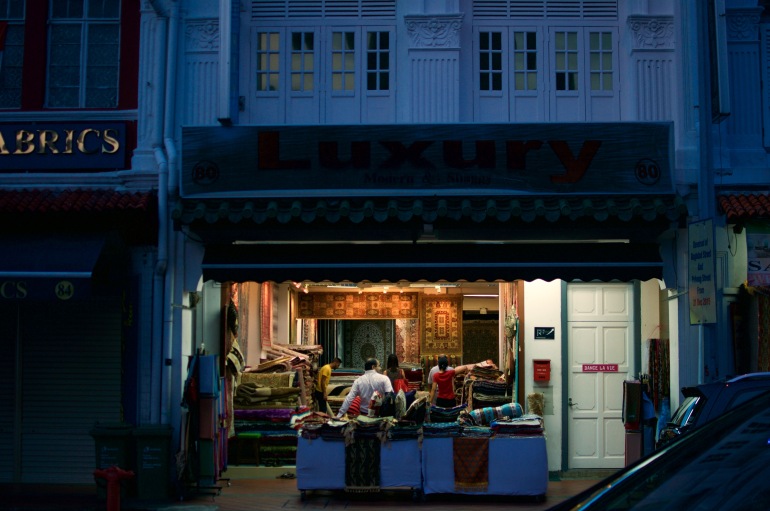 The first photo is my beautiful sister. And I think it’s my favorite photo of her ever. Although I suppose I’m a little biased as I took it. But it’s everything I could want from a candid very poorly lit photo.

The next one, of the cow, I remember taking and thinking like, “This is it. This is the shot that gets me into National Geographic.” Because what photographer doesn’t have that thought from time to time? However when I look at it now I just think, “too green, too shallow, and too much noise.” But I still like it anyway.

The last photo is from the Tai O fishing village. It’s my typical street shot. But with the mountains in the background and the hanging shirts and plants in the foreground I think it just looks very Hong Kong. 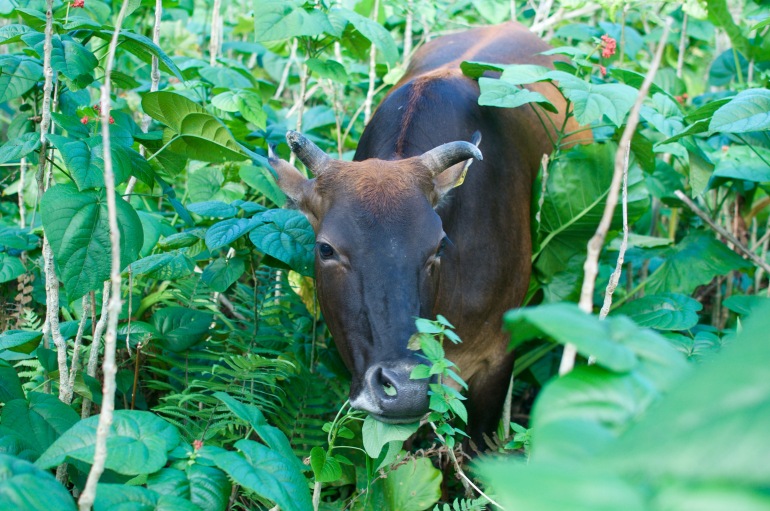 And to wrap things up are my photos of Korea. I did a pretty poor job of capturing Korea in the year that I’ve been here. Thankfully I’ve got at least one more in order to amend that. Hopefully now that I’m a little more comfortable I’ll be less afraid to start brining my camera around.

There really is something so different from getting your camera out when you’re on vacation than toting it around when you’re just going about your regular life.

But my regular life, and photos of it, are what I will wish for most whenever I leave. So hopefully 2018 can be the year to do that better.

The first photo is from my rooftop. One night the moon was really full and I felt like trying out some long exposure shots. I think this one turned out quite well!

Next is from what is possibly Korea’s most famous photo spot. Everyone who comes to Korea takes this same photo. But the lighting was nice so who cares.

And the last is from my favorite temple in Seoul. I like that the guy in the bottom corner gives it some scale. 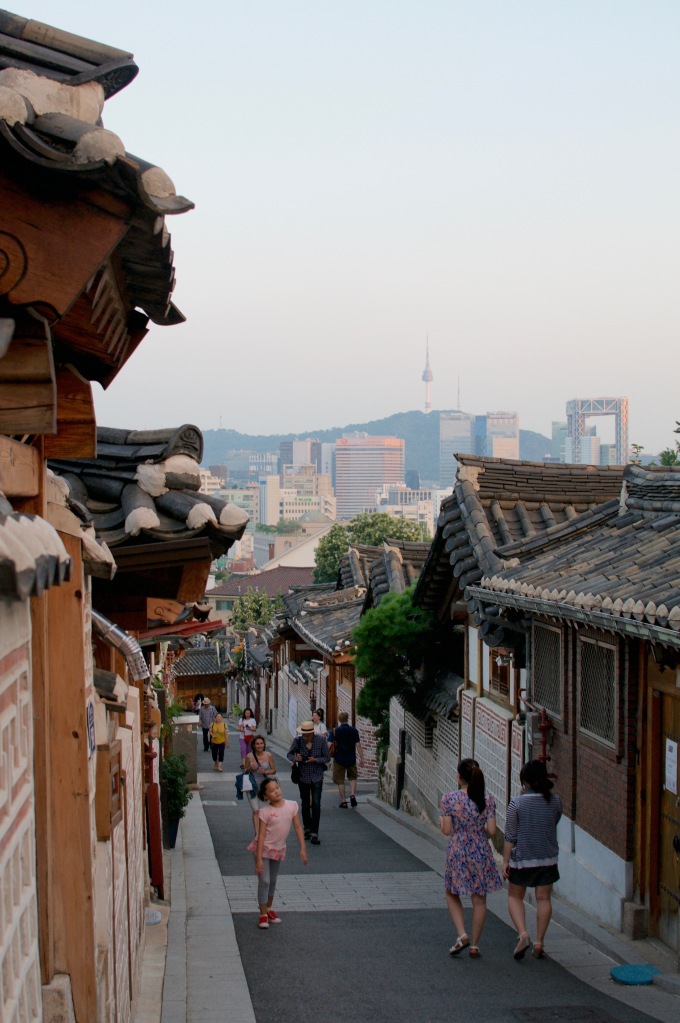 Well as per usual that got way out of hand. I had hoped to make a short little post about my camera, practically my baby, turning ten years old. And what we got instead was an entire history of my photography. Which may or may not be interesting to anyone other than me.

If you made it this far, thank you. I hope you enjoyed this! I’m looking forward to writing more about photography on this blog in the future.