Last Sunday I took the TOPIK I exam.

TOPIK stands for test of proficiency in Korean and is split into two different exams. One is a beginner level exam, and next is for intermediate/advanced levels. TOPIK I covers levels 1 and 2 whereas TOPIK II tests for levels 3, 4, 5, and 6.

So for the exam that I took my highest possible score is a 2. We’re supposed to get our scores back after about two weeks, so I’ll be sure you let you know when I find out!

I started studying for the exam about a month and a half out from the test day. I had been saying to one of my Korean friends that I wanted to take the test but I never actually got around to singing up for it. Then one day when we were hanging out she suddenly said to me, “I have a present for you.” and then put a TOPIK test prep book on the table in front of me.

I owe a lot to this friend, pretty much the entirety of my speaking skills are thanks to her, as she’s the only person who will exclusively speak to me in Korean when we are together. But I also don’t know if I would have been as  motivated to take the exam if it weren’t for her.

This test was exactly the motivation I needed to try to get my vocabulary up to speed with my grammar, as has been my struggle for some time now.

The book she gave me was basically 5 practice tests and then explanations of the answers and how to solve the questions. So my study strategy was to take the practice tests and along the way circle every word that I didn’t know. Then I’d see what I got wrong and on a separate piece of paper go through and write down all those words I didn’t know and find their definitions.

I would study the Korean and the English together for a little while and the write down all the words again but this time with no English next to them and study that.

Then I’d take another practice test, do the same thing, and add the words to my growing list of vocabulary. Periodically I’d go through the paper with only Korean and re-write it again eliminating the words that I had completely memorized by that point. 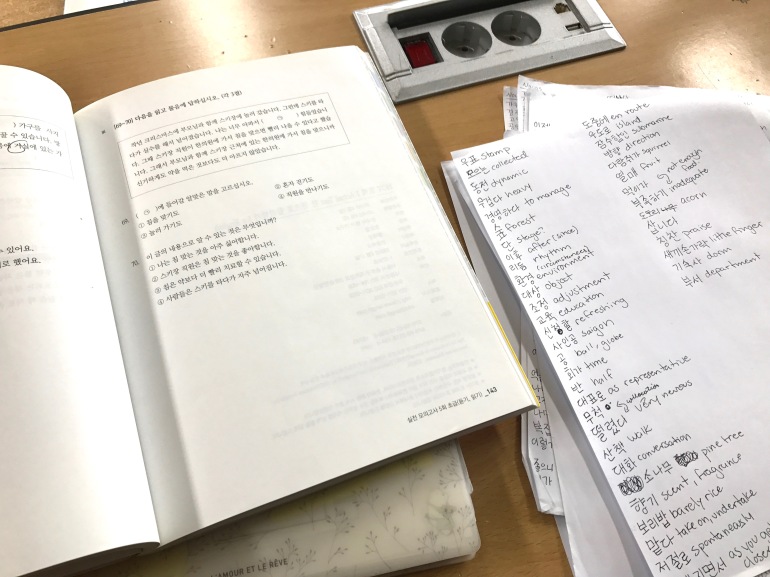 Anyway, all that to say, I pretty much only studied vocabulary. But that’s because I have, in my Korean studies, way over focused on grammar and almost completely neglected vocab.

The day of the test I woke up very early, despite having not slept much at all the night before, and headed out to the university where I would be taking the test. I left my house really early because I was worried about not being able to find the building and classroom where I was supposed to take the test.

But of course it ended up being really easy to find and so, after walking in the freezing air across the campus, I then got to sit in an equally as freezing classroom while I waited for everyone else to show up. 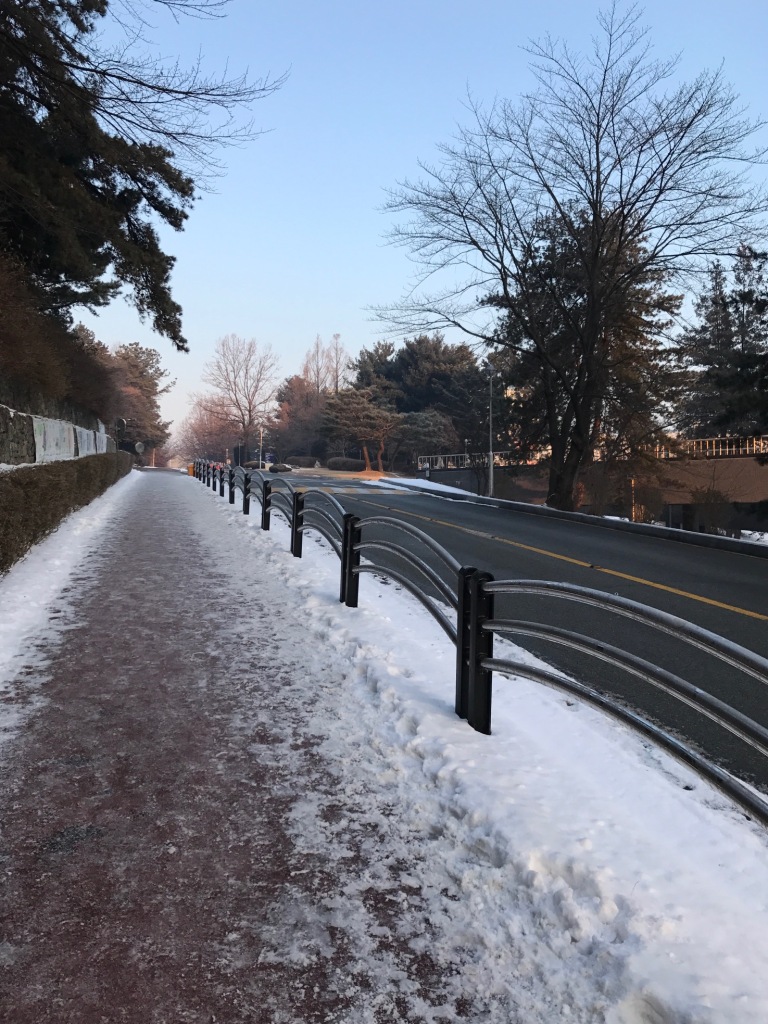 Eventually they started to trickle in and then the proctors showed up. They collected everyone’s cellphones into the same kind of “cell phone bag” that the teachers at my school put our kids phones in. Then they went around and checked everyone’s ID and registration number.

When the test finally started it was the listening section first. The listening was really easy. I remember reading a blog from someone else who’d taken the test and they said how they could almost fall asleep just waiting for the voice to finish reading the sentence. Basically they speak really slowly.

Which is great for ease of understanding but apart from this exam I have never heard a Korean person speak that slowly ever. Even to me. But I’m certainly not complaining.

Then the listening section finished and then it was on to reading. Maybe I just got lucky with my particular test, but the reading section was actually much easier than the practice tests I had been taking.

And then, more quickly than I realized, the proctor was telling us we had 5 minutes left. I took me pretty much exactly the amount of time given to finish the test, look over all my answers once, and double-check once more that I had marked the correct letter on the answer sheet.

And I actually did find one mistake so I’m glad I took the time to do that.

After the exam I was super tired from not sleeping well the night before, and hungry from not having eaten a proper breakfast. So I stopped into Subway, ate, and the hopped back in the bus to go home.

It was a really cool experience to be in a Korean university classroom, and taking this test along with other people from all over the world. It made me even more motivated to keep studying and prepare for the next level test.

If anyone out there is considering taking the test I would highly recommend it! It was good motivation and a good experience! But maybe get a Korean friend to help you sign up because the website, in typical Korean bureaucratic fashion, is an absolute nightmare to figure out. Or maybe that was just me.

Anyway, thanks for reading!