We arrived in Osaka at about 10:25am running on Loterria burgers and roughly three hours sleep from the night before. To use the word, “exhausted” would be an understatement. I felt like a zombie.

And we felt even more like zombies after the hour and a half long bus ride from the Osaka airport to Kyoto, where the sun was flooding in making everything just a little too warm and the steady hum of the bus just a little too soothing.

But we did eventually arrive at Kyoto station, got a cab to our hostel, and managed to arrive in one piece. It wasn’t yet time for check in so we put our bags away, tried to freshen up as best we could, and then headed out to see the city.

We weren’t sure of exactly what we wanted to see so we set off walking in the direction of a certain temple a ways away. Our main goal in visiting Kyoto this time of year, was to see as much of the beautiful fall leaves as possible. It turned out that path put us perfectly in the way of tons of different places where we could do just that. The first place we stumbled across was right past our hostel.

This little park was literally just off the side of the road and was a perfect start to our trip. One of the first things that surprised us about Kyoto were the number of people in yukata and kimono. Maybe it was because of the beautiful trees that everyone was out dressed up, or maybe Kyoto is always like this. Either way it made the whole scene even more beautiful. 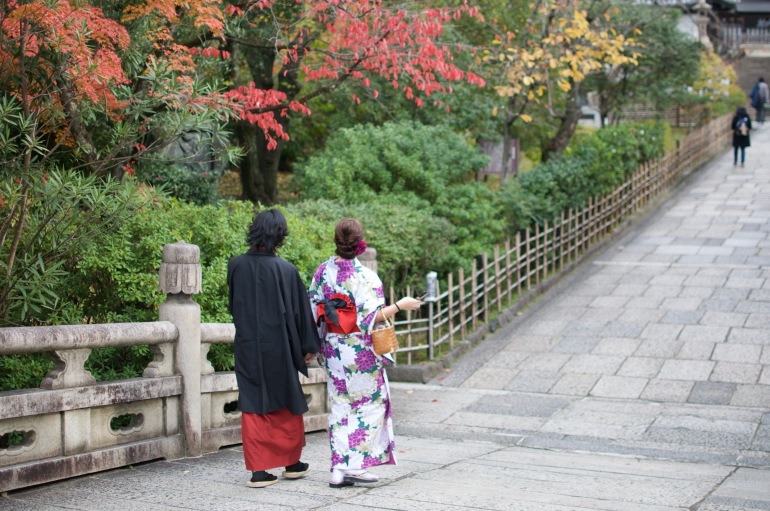 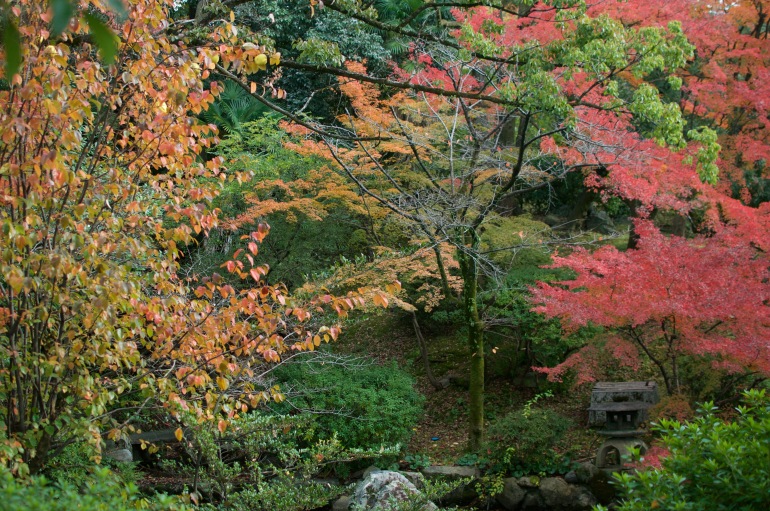 As we continued up the main street we strayed down some of the little side alleys. 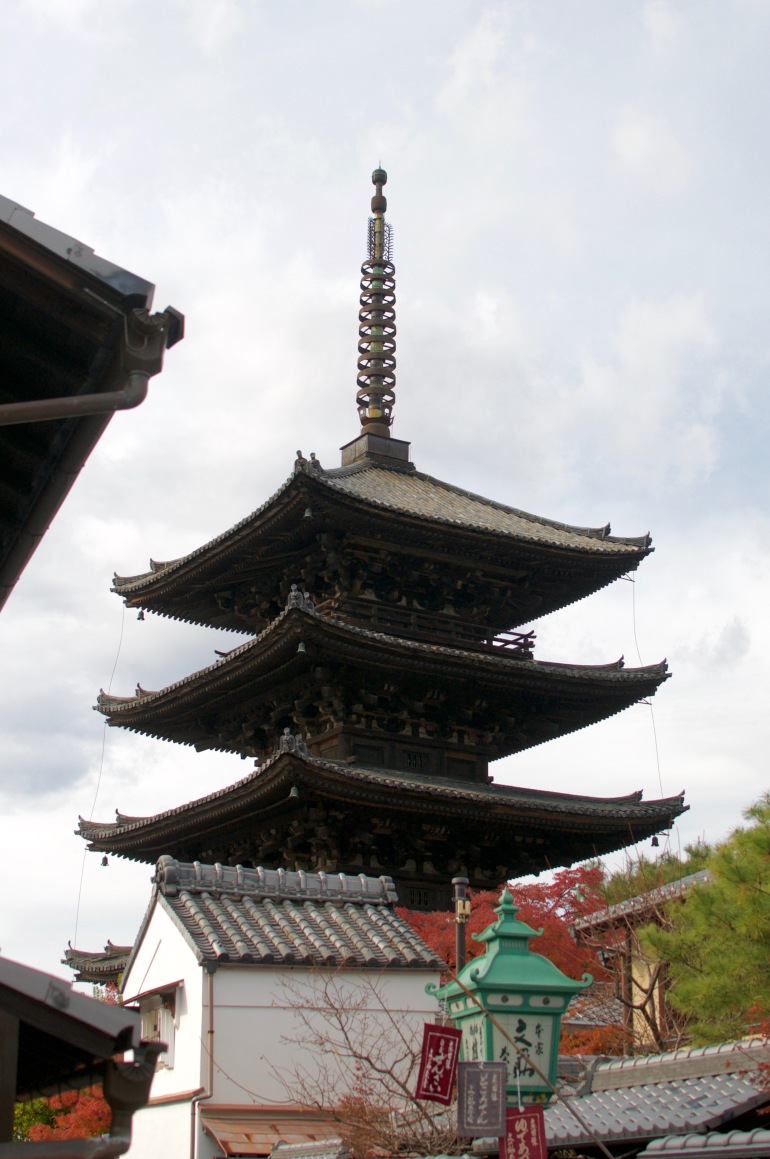 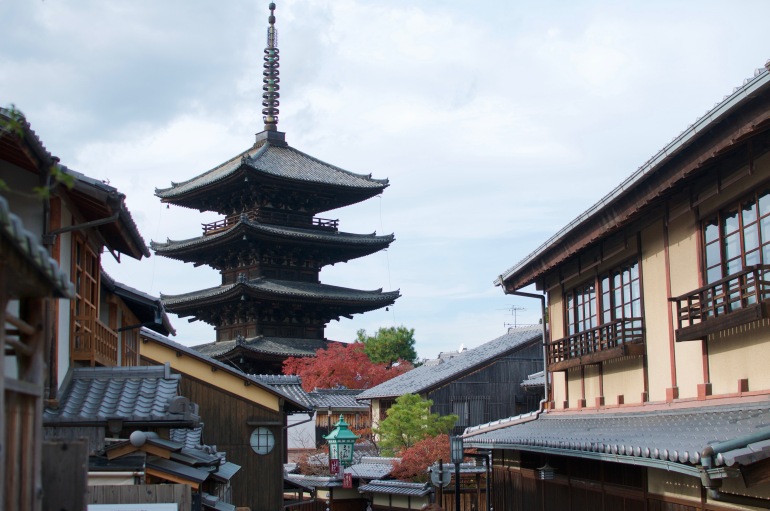 Taking pictures of streets is something I love. You can check out my whole post about the streets of Kyoto HERE. 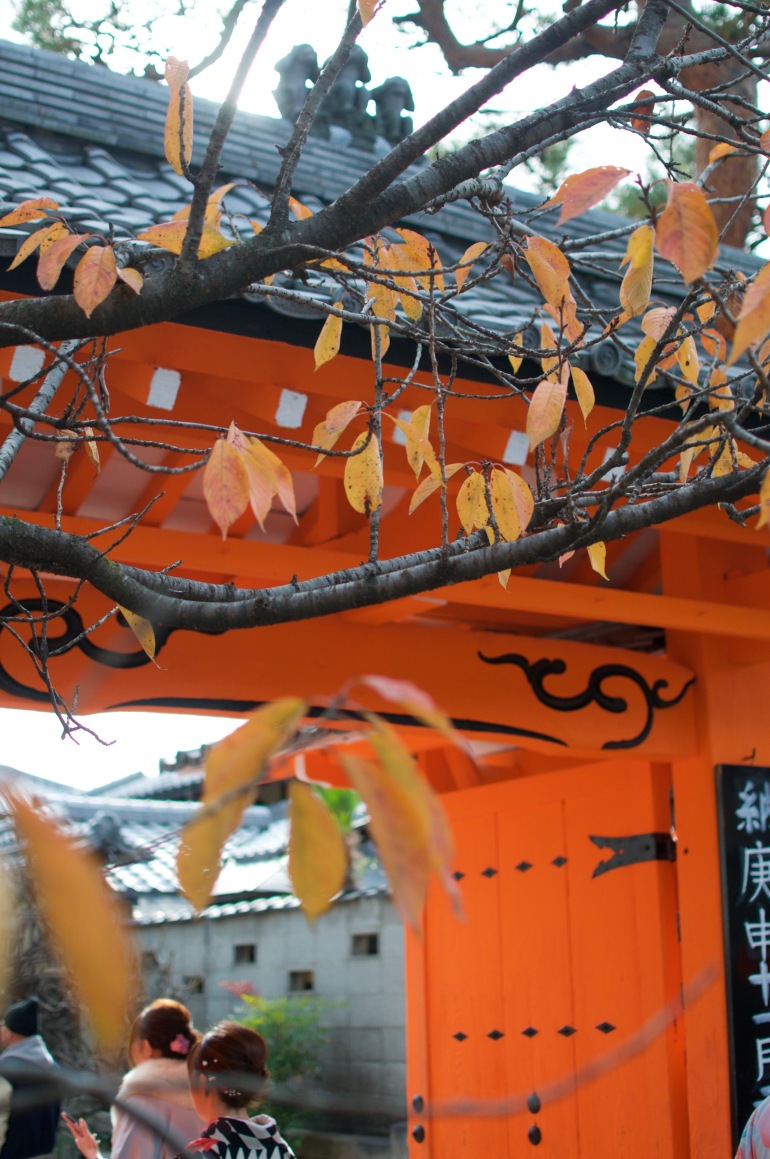 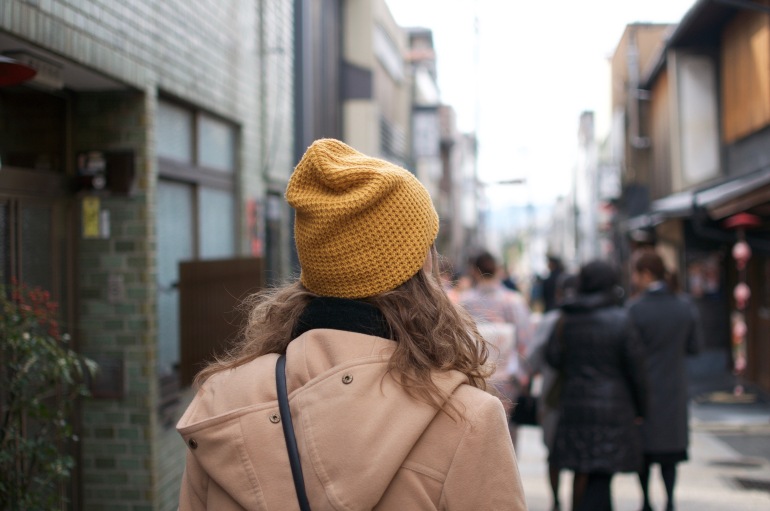 Our wandering eventually lead us to a market street that reminded me a lot of Asakusa in Tokyo. Off that street were many other smaller alleys as well. It was at that point that we realized we were hungry enough to eat just about anything that stepped in front of us, so we decided it was time to break for lunch. 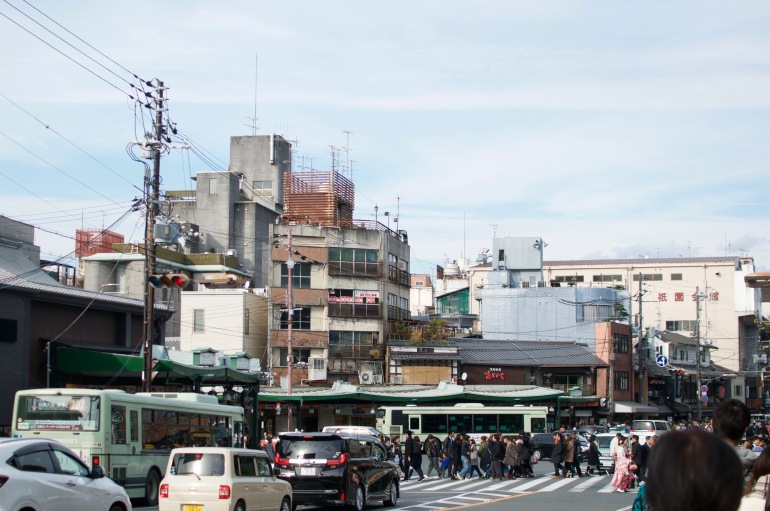 Of course the moment you make the decision to eat you cease to find anywhere to actually have a meal. So we continued to walk around for a while longer desperately in search of reasonably priced comfort food.

We eventually came across a suitable restaurant and ducked inside for warmth and much-needed food.

My soba and tempura was exactly what I needed to make it through the next few hours. Still exhausted we decided to walk back to the hostel, check in, rest for a bit, and then head back out for the evening.

Once we’d pulled ourselves together and had some coffee we set out again for our evening in Kyoto. After a failed attempt to see the imperial palace we were left once again to just see what would happen. I searched for a place we could get some food and a beer and we ended up at this really cool little place right close to the imperial palace.

The vibe was really chill, the food was incredible, and the staff were so lovely.

10/10 would recommend if you’re in the area at night-time. The place was called Takanoya World Craft Beer Kyoto.

While we ate we searched for some other temples to see at night-time and decided on three that were along the way back to our hostel. 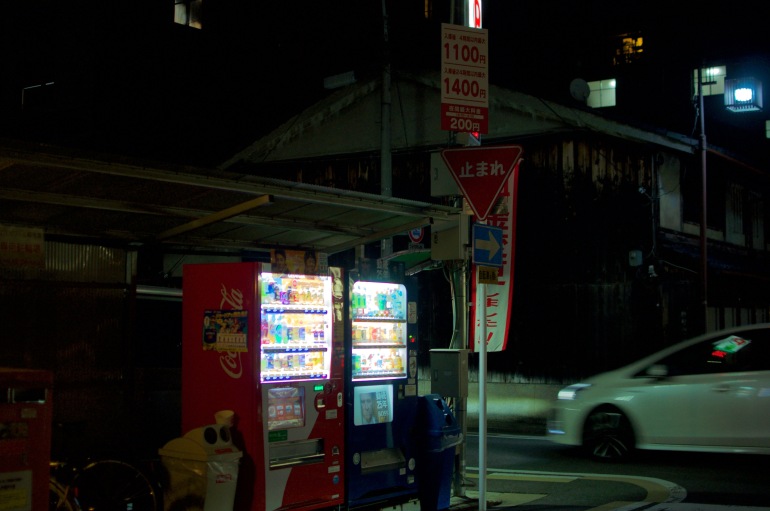 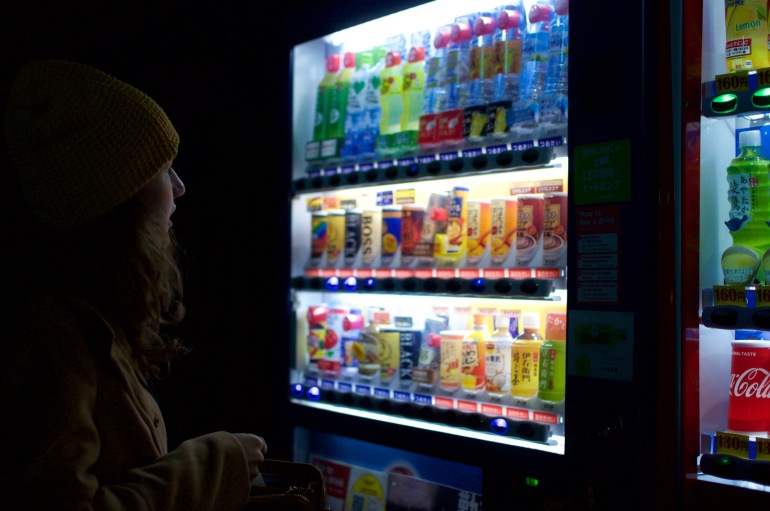 However once we arrived at the first place it was clear that we’d be spending our whole evening there. Without knowing it, we accidentally ended up at an event that was being advertised all through the city.

Unbeknownst to us Shoren-in Temple does a show in late November where they light up all the amazing fall foliage. We had no idea what we were walking into after paying our five dollars but for both of us, it was immediately worth the entire trip. Our exhaustion was soon forgotten. 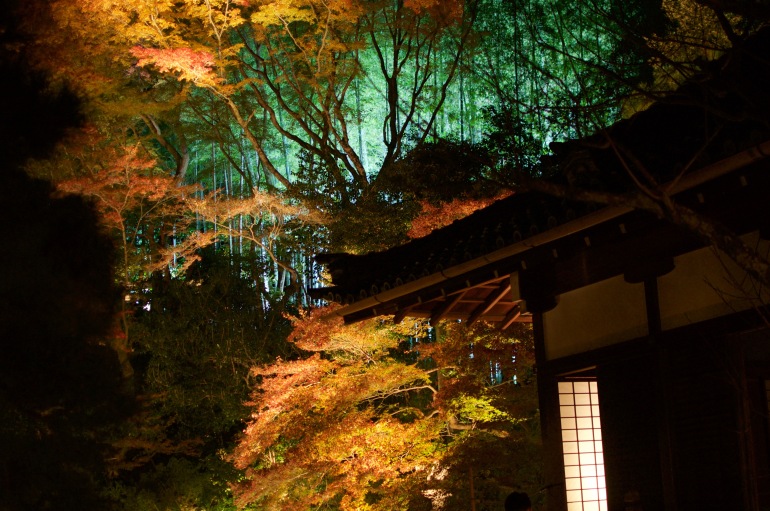 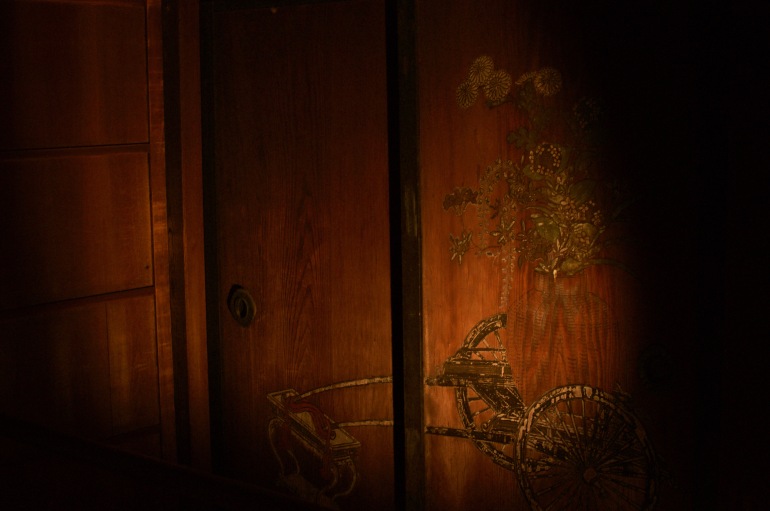 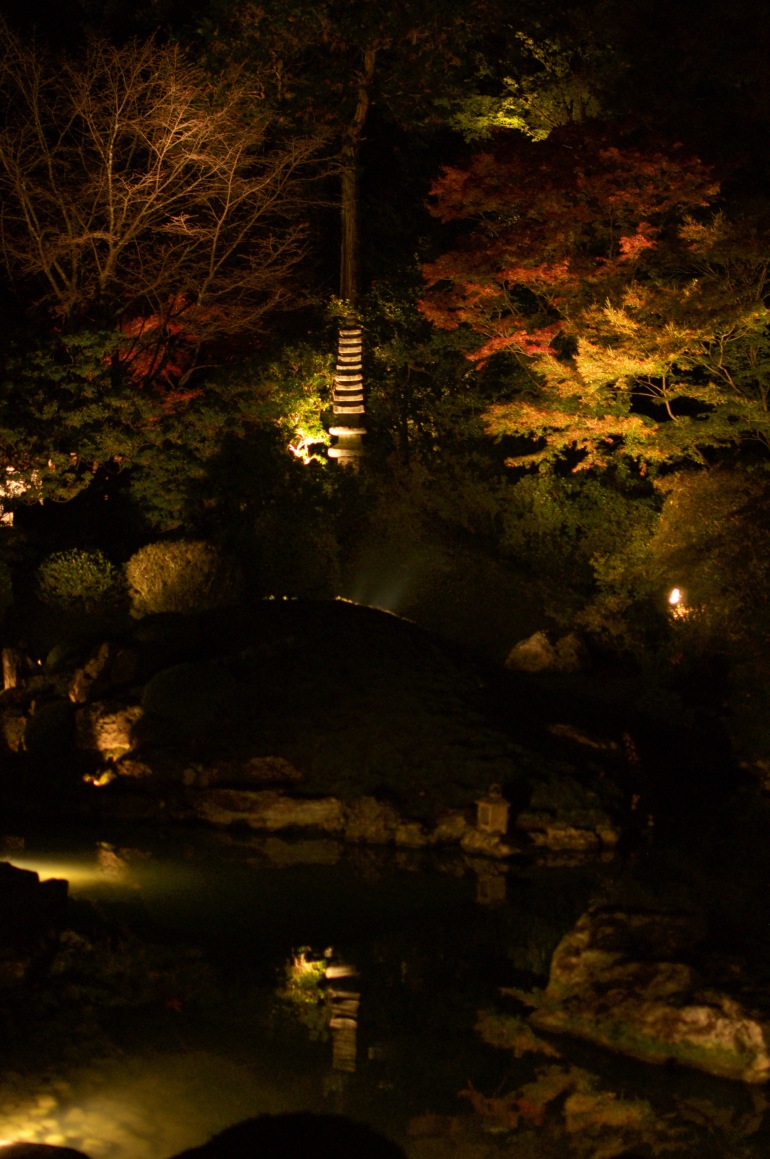 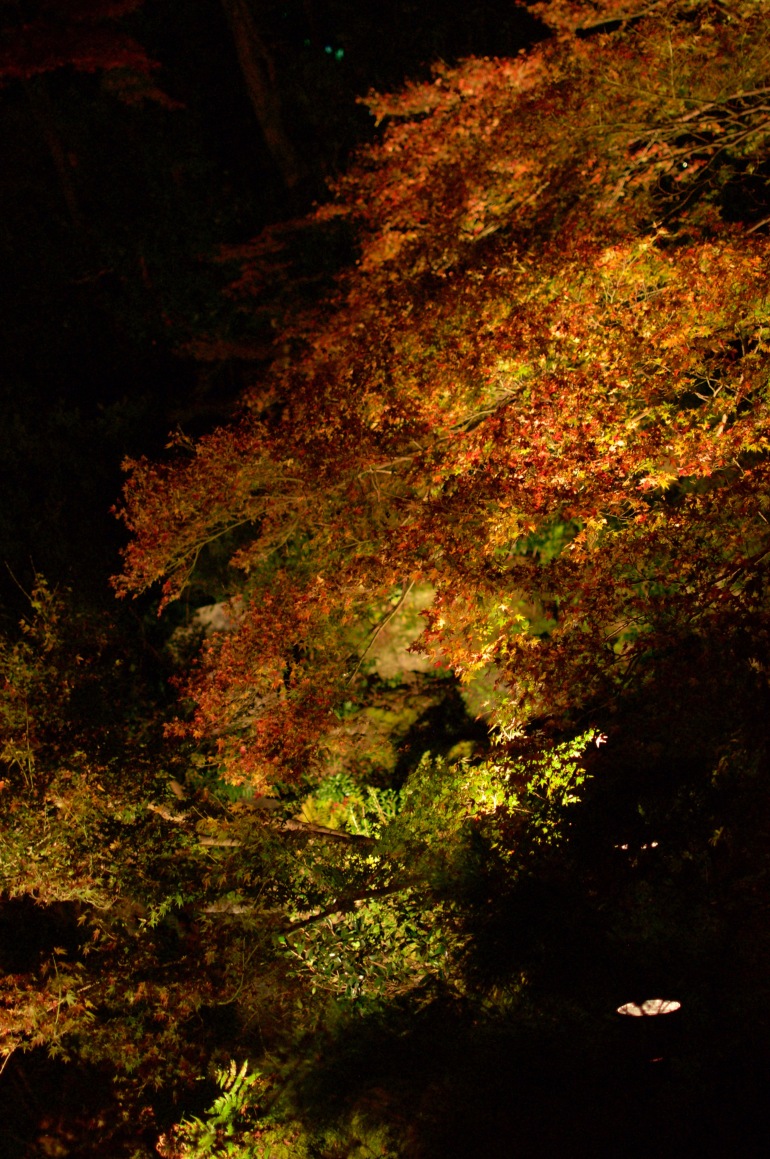 The path led through the garden and then back into the temple where you could choose to do a little tea ceremony. My sister had been wanting to so this for a long time so we went into the quiet side room and got to have some green tea and a little cookie/cake treat. 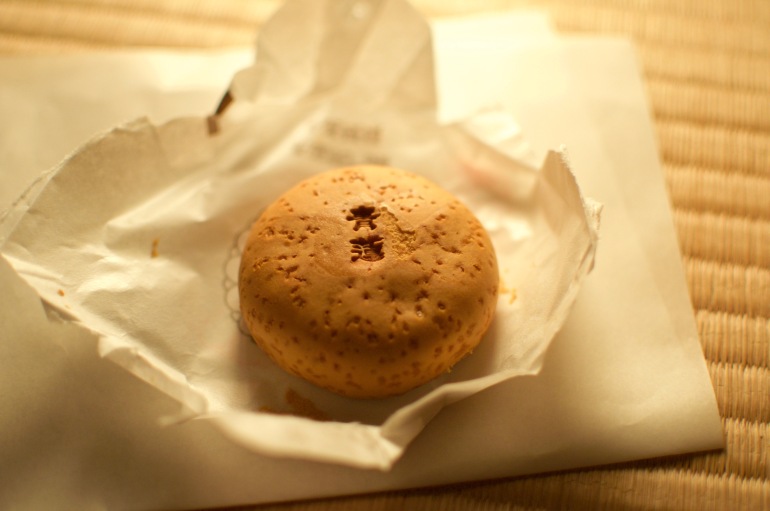 Despite having lived in Asia for almost 11 months now, I do not generally like green tea. But this was really good.

The path then led back out into the garden where we got to see some of the best fall colors I’ve ever experienced. 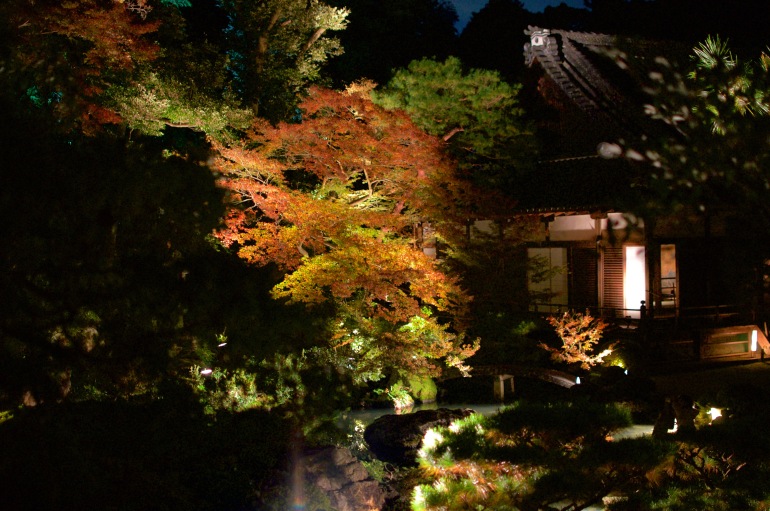 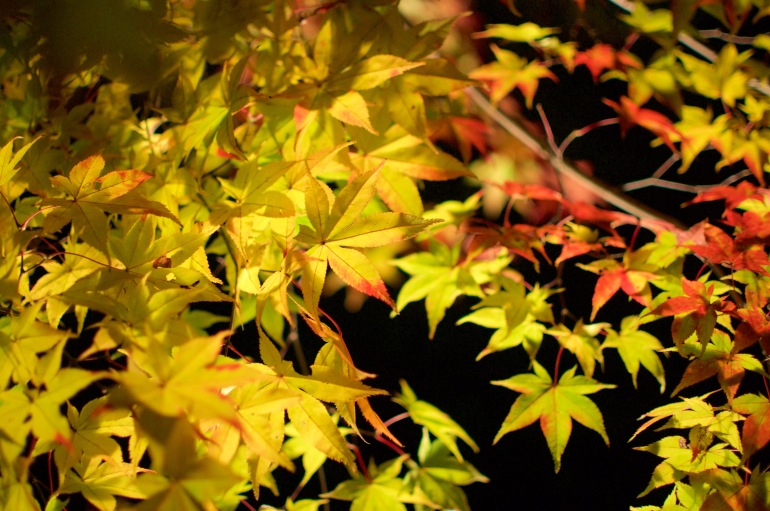 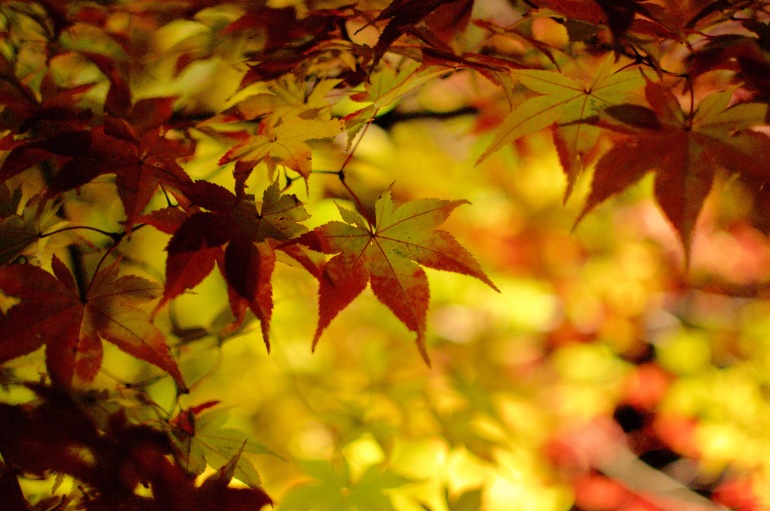 At this point we were delirious from a combination of happiness and pure exhaustion. We felt so lucky to have stumbled upon this event but then after the garden it got even better.

Soon the path started to lead up a hill towards a bamboo garden. I suppose I’ve seen pictures of this in Kyoto before but in my memory it was this magical other-worldly garden that just appeared out of no where much to our sleep-deprived surprise. 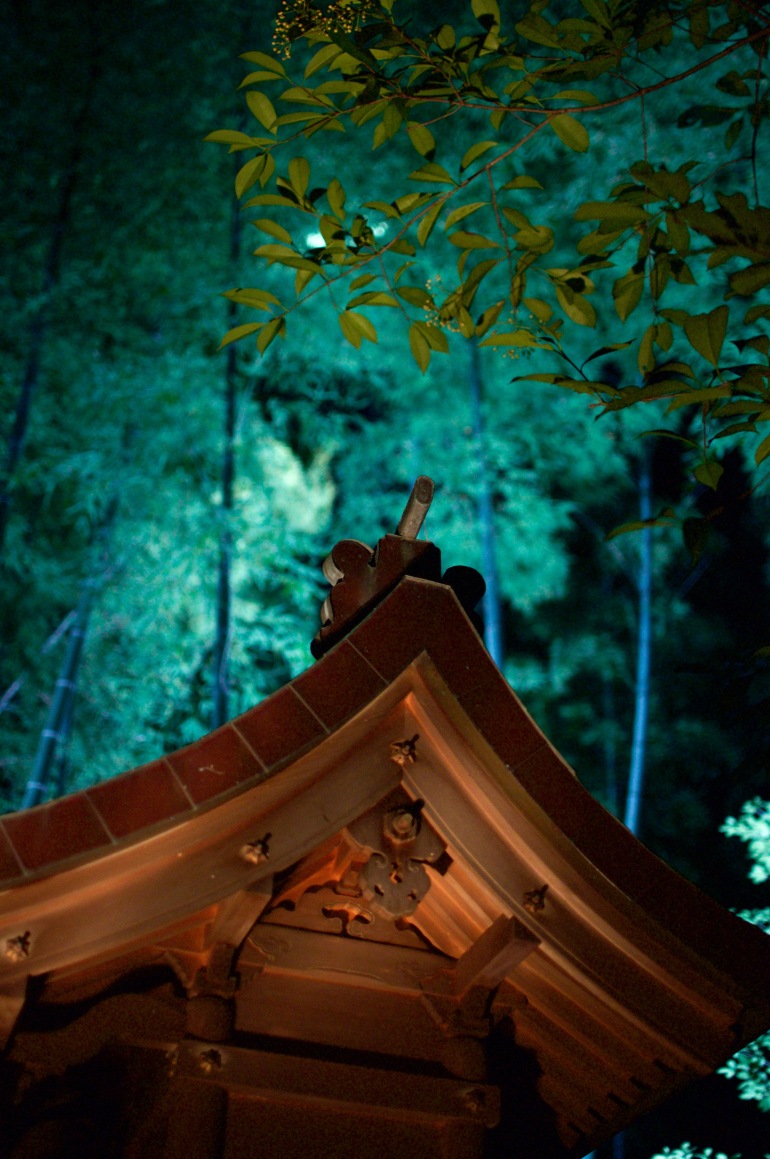 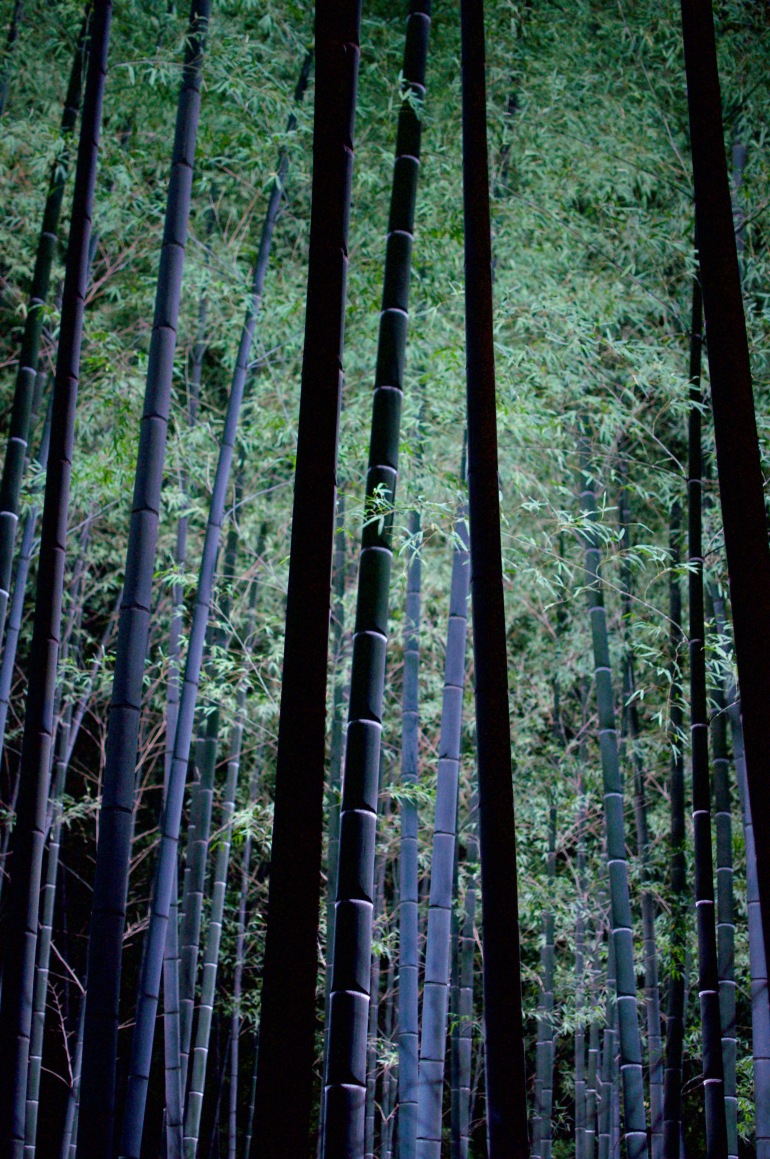 After the bamboo forest we were led on a path back towards the entrance and past the led light field. 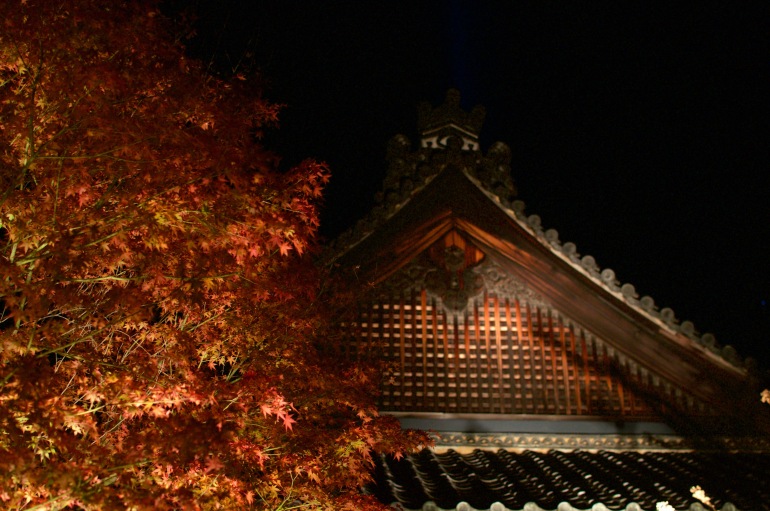 We walked back to the hostel after that enjoying the peaceful streets and marveling over the fact that we had just accidentally found that amazing temple. 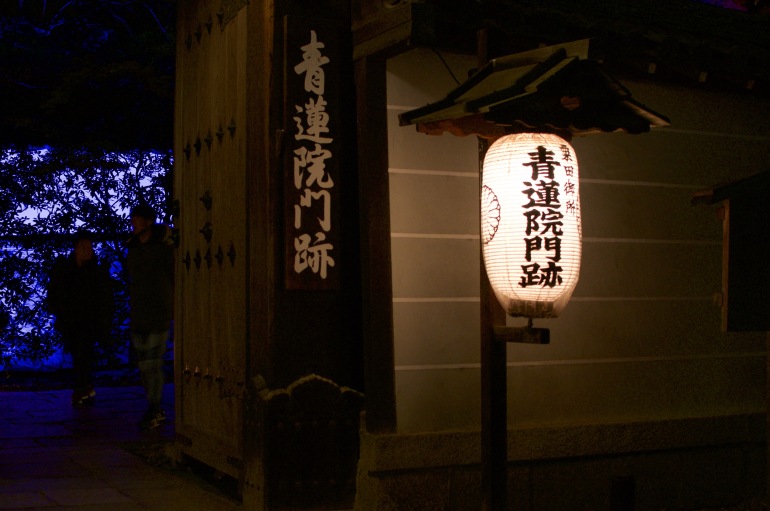 At one point we came across a pretty little stream and bridge. 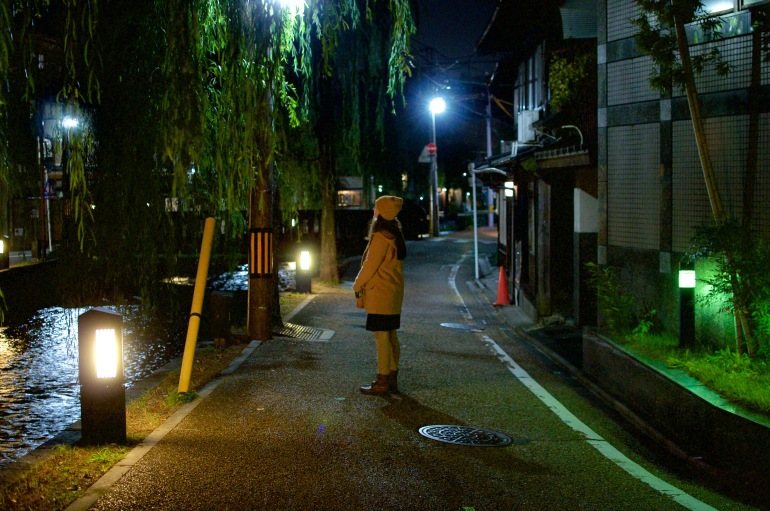 Walking through Kyoto in the early but dark evening was something really special. I love Japan, and I always know that. But something about the streets always feel really homey to me. I don’t know why exactly, but Japan is cozy. Korea is comfortable in that it’s easy, but Japan is comfortable in that somehow it feels vaguely familiar to me and I’m not really sure why.

As we walked back home we passed a temple that we’d seen earlier and had been calling “orange guy” and decided to stop in.

And with that we walked a little further up the road and turned into our hostel.

It was a packed day and when we finally laid down to sleep I don’t know if it took me more than 2 minutes to pass out. But it was worth it. Every moment spent seeing the city with my sister was worth it. We’ve wanted to take this trip together for a long time. And it wasn’t easy to pull off. But we made it, and it was amazing.

As always these photos are precious to me because they represent some very special memories, so I’m really happy to be able to share them with all of you 🙂

I hope you enjoyed this post as much as I enjoyed being there! Thanks for reading! Look forward to part 2 soon!