With EPIK placements for the Spring 2018 intake coming up I know that many of your are in the horrible in-between waiting period. With nothing much to do other than think about packing and study Korean, I know that I spent a lot of time just desperately trying to envision what my life was going to look like in a matter of weeks.

So during that horrible waiting period I spent a LOT of time reading blogs from EPIK teachers and watching YouTube videos in an attempt to “prepare” myself. What I didn’t read a lot of, however, were posts from teachers at the middle school level.

The truth is that most people will get elementary school placements. Many offices of education no longer have the funding from the Korean government to maintain foreign teachers at the middle and high school levels and so those positions are usually the first to go when budget cuts come around. Apparently Daejeon’s native teacher program has a good reputation within in the country so they have been able to avoid a lot of the budget cuts so far. Or so I’ve been told.

And that may be why more of us than expected got middle school positions. When I was going through the application and interview process I was lead to believe, or maybe mistakenly believed, that the possibility of getting a secondary position was slim to none. Having only taught university/adult aged students before, I was actually hoping for secondary but I had all but taken it off of my radar because I didn’t think it was really an option.

But orientation rolled around and soon people were starting to hear from their co-teachers or the previous teacher at their school via Facebook even before the official placements were given on the last day. So as we were going through the classes and practice teach activity, a lot of people already knew what levels and schools they had.

Myself included. I was contacted by my co-teacher and the previous teacher at my school about 3 days into orientation so going through the mostly elementary specific classes left me with an unclear picture of what my experience was going to be like. It seemed, and this is maybe a little biased due to a story I’m about to explain, that the entire orientation was for elementary school teachers and the secondary teachers were just told, “It’s gonna be hard! Also, most of the activities we just spent a week talking about won’t work with your kids! Have fun!”

And that brings me to my story. Myself and another friend found out that we were going to be teaching middle school. So we started going up to each of the lecturers after class and asking if them if they had any advice, related to the topic they had spoken about, for a middle school specific situation.

And here is the frustrating part. Every single one of them said something along the lines of, “hahah I don’t know, good luck with that.”

I’m not kidding. One guy even said to us verbatim, “Middle school positions are considered the worst in EPIK,” and then proceeded to not give us any advice or tips or even encouragement.

Not one person we talked to said anything positive about our placements. Which, thinking about it now, makes me quite angry. Since that time I’ve met tons of middle school teachers who all love their students and jobs, but I don’t know why at orientation we were given such a bleak picture.

So I wanted to write this for you guys who will receive middle school placements. For the people who randomly get a Facebook message from someone saying, “hi nice to meet you! I’m you’re new co-teacher at ____ Middle School!” and for the people who find themselves staring in shock at a weighty envelope with their name and the word “Secondary” written across the front.

I want to offer you the encouragement that I did not receive from the “experienced” teachers at orientation.

So. You’re going to be teaching middle school in Korea. Let me be the first to say, congratulations! Because it’s possible not many people have said that to you yet.

Your students are going to be hilarious and intelligent and troubled and kind and every thing you remember being as a 13-year-old.

You will have very different challenges than your elementary school teacher friends but you will also have different successes. 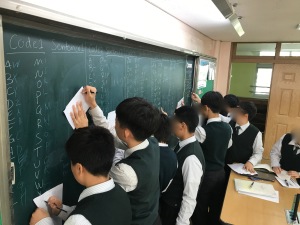 Your students will have the ability to be disrespectful with more articulate language but they will also have the words to tell you they love you and appreciate you and want to tell you about their weekend and the boy in 3-4 class.

If you have some tough classes, don’t worry. They are tough for almost everyone. If you find yourself wondering if you are the only teacher who feels that a particular class may eat you alive given the right circumstances, don’t worry. You are not alone in that.

Your students will be old enough to see you as a human. They will understand that you are far away from your home. That you must miss your family and that living in Korea must be difficult. It probably won’t change the way they act in class. But you will see it in the brief one-on-one conversations you have with them, in the little gifts they give you, and in their expression if you ever happen to tell them that you miss your family. 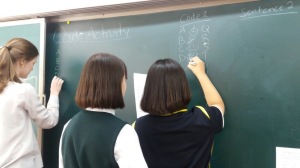 They will be capable of great creativity if motivated in the right way and great apathy if not. But the times where you manage to fish out that creativity, that inherent teenage silliness, will be worth it.

They will have problems. You will quickly learn the faces of the students who appear in the office after school every single day to be punished. You will hear the whispers between the other teachers about when that one student is coming back from where ever he was sent to.

But that doesn’t account for many of them. Many of them you will see in the office for different reasons. To help a teacher carry their computer to the next class. To get some candy for being good in the last period, to ask a question about their homework, or just pester their favorite teacher for some attention. 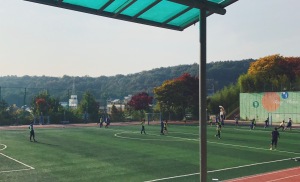 You will have your trouble classes but sometimes a group of them appear next to your desk to say “Teacher! 2 class!” then slap another student to translate for him as he rattles something off in Korean. Then the second student says, “Second class, we want you to come.” And then he slaps a third student to translate better for him. Then that student says, “Oh they want you to come to their class next period. Just you.”

And I ask, “why?” and he says, “because they love you.” And then all of them do the finger hearts and hands and the fourth student says, “I love you teacher.”

Meaningful conversation between you and your students will be sparse, so you will cherish each of those rare but important conversations like gold. You will immediately love the boisterous kids whose comedy and confidence carry the class, and over time you will come to love the shy kids who need a bit longer to muster the courage to speak to you. The ones whose trust you have to work for a little bit. (If you’re me, someone who was once that very shy middle schooler, you will secretly love those kids the most.) 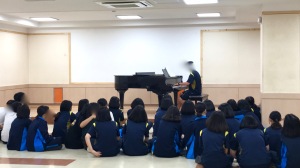 You will not understand when your elementary school teacher friends talk about singing songs with their students to practice vocabulary. But you will know the very unique and empowering feeling of having successfully gotten a 14-year-old to enjoy something while learning at the same time.

You will have so much fun.

In the end people are just people. Kids are just kids. And if you respect them as humans, and try to do right by them as both a person and a teacher you will be fine. You reap what you sow. So sow (English man, what a language) hard work, respect, kindness, and excitement. If you do you will have an experience that is worthwhile and truly enjoyable.

You can prove the people at my orientation wrong by loving your job and your kids despite the multitude of challenges. Yes they are difficult. But even in spite of that loving them is very very easy. Trust me.

So, one more time, if you got a middle school placement with EPIK congratulations! Regardless of what you hear from anyone else, if people try to tell you this is the worst placement, it’s not. I’m obviously wildly biased but I hope that after some time you will feel the same way too.

(Also I included some pictures here of students which I don’t normally do. All faces and names and titles specific to my school are blurred for the sake of privacy but I felt like it was important to give some kind of visual to ground all my intangible rambling. A lot of blogs have no problem showing students pictures, and it seems to me that rules about that kind of thing in Korea are slim to none. Their names and faces are precious to me so as much as I want to share how much I love them with you all, I feel much stronger that it’s my responsibility to protect their privacy. Anyway, I just felt the need to leave this little disclaimer here. Hope you understand!)