As of March 12th I have officially been in Korea for 1 month. And as of two days ago I have been at my job for three weeks. In the grand scheme of my Korean experience this is almost nothing. But you know how they say that a persons first 5 years are the most crucial of their entire life? I kind of feel like that. Like its only going to get easier from here, now is the time when all of my first impressions are being made.

And from where I sit right now, in a Paris Baguette drinking a coffee before church, I’m feeling pretty darn good about things.

I haven’t had a specific occasion to write in the last week or so, so I thought I would just do kind of a general update. For anyone who’s interested.

Work is really good. It’s really hard, I’m exhausted at 4:30, I’ve accidentally fallen asleep when I get home for four hours straight two times now, and every single day is a new challenge and adventure. I finally finished doing my “introduction” class with all of the classes that I will be teaching. Seven grade one classes, seven grade two classes, seven grade three classes, an English-speaking club, and my after school class.

I did that introduction class twenty-four separate times for a week straight. I could do it in my sleep now if I had to. But thankfully it’s finally over. I have officially “met” all seven hundred of my students.

After the week of introductions, I finally got to move on to real content. So for me that comes in the form of teaching out of the textbook to cover the listening speaking portion and then I’m allowed to do what I want to get them practicing the language. Teaching from the textbooks is a double-edged sword here. It’s nice in that it takes the pressure off of you to come up with every single lesson from scratch. A lot of EPIK teachers have to do that. So in theory it makes my job easier. But of course the other side is that the textbook is cheesy. But I can live with cheesy.

So this last week my grade one students were doing, “how are you?” I taught them “what’s up” and they looooove it. My second graders did, “I hope to…” and I ended up with a lot of “I hope to have many girlfriends,” and “I hope to marry a rich man.” And my grade three students were doing, “I’m thinking of,” and “it’s important to.” And guess how much fifteen year old boys care about what it’s “important to do” in your life? Yea, not at all.

But I feel good having that first round of lessons under my belt. I’m excited for this next week to move on to more fun activities before the unit ends.

The novelty of me hasn’t completely worn off, however ever there are plenty of classes where that seems to have no correlation to their behavior in class. A thirteen year old is a thirteen year old no matter what country you’re in.

I’ve gotten closer to a few of my students, two girls in particular who come into my office to talk to me in-between classes. And I was even lucky enough to get a few little presents on White Day from some of them. (White day is kind of like a second valentines day. Or another excuse to give people candy. No complaints here.) 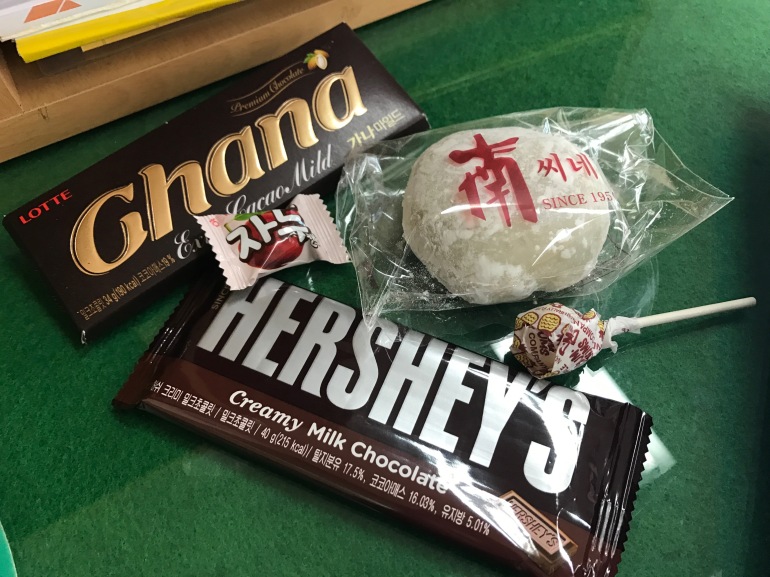 My coworkers are proving to be my saving grace throughout this whole thing. I teach all of my classes with a co-teacher and I have 5 different co-teachers depending on the class. The very brief moments we have together walking to class chatting about nothing, and the moments walking back to the office afterwards either celebrating that we survived another class or lamenting the disaster we just witnessed, are some of the highlights of my day.

After work on Friday everyone was completely wiped. But rather than get out of the building as quickly as possible someone brought in a little ice cream cake for us to all share. We sat together and they talked about the week in Korean and I didn’t need to know their words. I could understand.

Then when we finished the cake, one of my coworkers suggested in a rather mischievous tone, “hey, let’s eat some ramen!” Then someone else said, “ramen party!” in English and a huge package of instant noodles that I’ve never seen was pulled out from somewhere.

It was just the ladies of my office left and they were VERY excited for me to try this type of ramen which is a mix between Chinese noodles and spaghetti. It was yummy, but mostly I just felt so incredibly happy to be here with them and included in this kind of thing that when I finally left work a little after 5:00 I couldn’t stop smiling.

Then there are the hours that I don’t spend at school. Depending on the day it’s kind of a mixed bag.  I’ve been trying really hard to force my self to do stuff after work, but most days I’m so exhausted that I just stay at home and crash early.

Lately it’s been a lot of just getting dinner with people after work. Partly because I don’t have anything to eat at home and partly because I’m looking for a reason to get out of the house. Some days my big outing for the evening is just going to the market at the end of my street. I buy a those giant bottles of water in the grocery store because I don’t want to drink the tap water. I’m sure it’s fine but my stomach is, shall we say, delicate and I’d rather not risk the possible disaster that could ensue.

Anyway, going to buy water is often my night-time activity.

A few nights ago I tried to order delivery chicken for the first time. Delivery food is a very big part of living in Korea, you can get just about anything delivered to your door at just about any time of the day. So I downloaded an app where you can make the order online without having to call, for fear my Korean wasn’t good enough, but of course the guy ended up not being able to find my house and so he called me to ask for help.

I have never been so painfully aware of my lack of Korean skills than in that moment. After a lot of me apologizing and repeating my address over again he said, “okay wait a minute.” I genuinely didn’t know if I was going to receive my food but about five minutes later there was a buzz on my intercom and I heard the glorious phrase, “치킨입니다.” I don’t know how he managed to find my place but I got my chicken and it was just as delicious as I had hoped.

So, week nights: solidly alright. Tired but I imagine that I will get used to my schedule eventually.

Then there are the weekends.

The weekend have been great so far. It’s nice to have a break from the constant pressure of being new and foreign and trying to impress everyone at work. But the weekends are a nice chance to see my other EPIK teacher friends and talk about how things are going.

We went to a bar/pizza place last night because my friend is on the hunt for IPA’s and this place was supposed to have a big selection of imported beers. But it’s also possible that we just wanted to go there because the name of it is, and I’m not kidding, “Craft PeePee.”

Why? I haven’t the slightest idea. They even have posters and shirts on the wall that say Craft PeePee on them. But we all got a good laugh from that.

One friend and I have been trying out churches in our area. And that has been quite an experience. The first weekend she was out-of-town and so I tried to go on my own. And as you might be able to guess I got lost and couldn’t find the church, so I didn’t end up making it that first weekend.

Then last weekend we went one and it was pretty good. (We also ended up finding a cute little park behind the bus stop.) 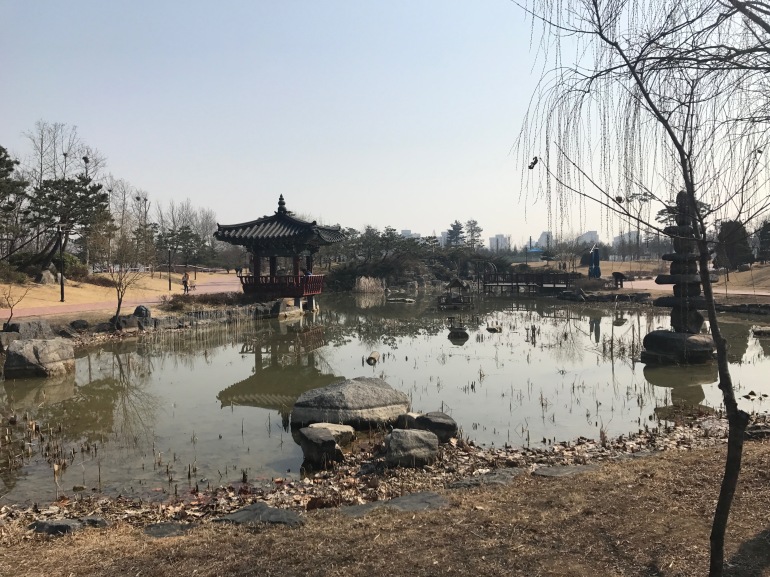 The people were nice but the service style was quite different from what we’re used to. Then we tried a different one this morning. This time we really liked the worship and the service but then there was a bible study afterwards that ended up lasting about 2 hours so we were there wayyyyy longer than anticipated.

Still a work in progress.

Yesterday I tried going to a volleyball group that one of my friends told me about. I thought it was going to just be people who get together to play for fun. But it was more of a class for people who want to learn how to play seriously. Or what it actually was, was my high school volleyball practices all over again. And it was intense.

I’ve been playing volleyball for about ten years now. But oh my word. I can’t walk today. And if I look closely at my arms I can see tiny little popped blood vessels where I was receiving the ball. It was fun in that it felt so familiar. Except instead of a coach yelling things in English he was yelling them in Korean.

So, weekends: great. I need to get up to Seoul here pretty soon also. 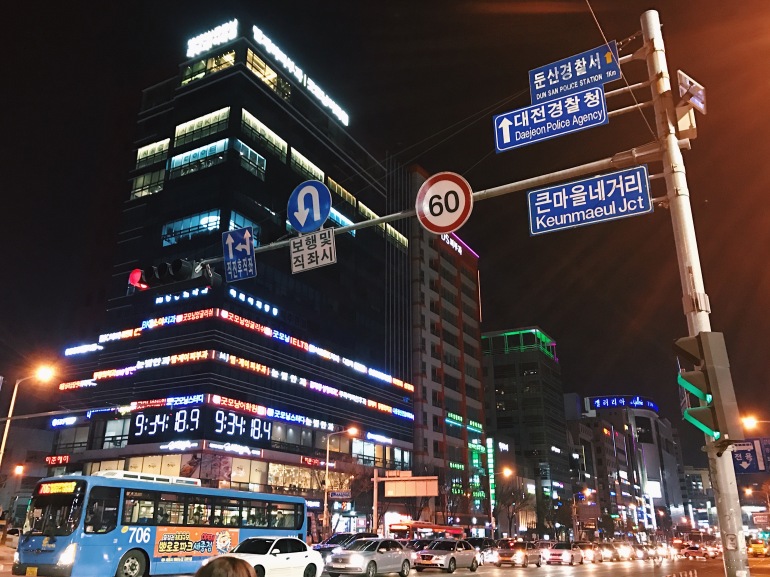 All in all things are pretty solid. I’m definitely still establishing my life here. I don’t have any consistent routines other than work, and I still have yet to properly figure out how to take my garbage out. But I’m very content, very grateful, and very excited for what the next month will bring. Thanks for reading!