Taking pictures is a part of life now. Camera’s are everywhere that you never thought they would need to be. On you computer, on your cell phone, in your home, and even drones are making their way down to the consumer level. The search for the perfect photo is constantly around us.

I wrote a blog post a while ago, check it out here, about how you shouldn’t travel for the sake of any ones else. You should travel to learn, and to be in the moment, and to notice things that you may never be able to if you are too focused on taking pictures that will do well on Facebook or Instagram.

HOWEVER, taking good photos can be a part of traveling for yourself. It can be an incredible way to experience a new place and to remember the places that you’ve been.

There can come a time when taking photos gets in the way of living in the moment. But that is not what we are going to talk about today.

Today, we are going to talk about what you actually need to know about how your camera works.

I would argue that anyone who wants to take good photos needs to be, at least in some capacity, in control of their camera. And as confusing as all those buttons and dials on your camera might seem, the truth is they all work together so beautifully and intuitively that once you spend just a little bit of time learning the mechanics, you’ll be able to use the technicality of it all to express what you see though the lens creatively.

So here we go.

Let’s start from the beginning shall we?

Photography is game of capturing light.

Every photo you take is a representation of light hitting a sensor, and before digital cameras, it was how the light hit a piece of film. The key with photography is controlling and manipulating that light so that you can achieve the look you want. 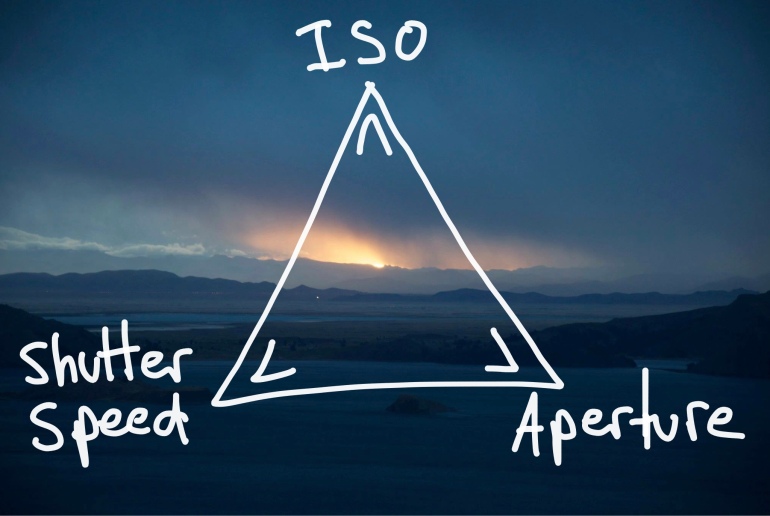 So let’s take shutter speed as our first point on the exposure triangle.

Let me give you an example.

These are two images of the exact same thing except that first photo has a short shutter speed and the second has a long one. Take a look at the difference between the two.

The first photo, the one with the short shutter speed, freezes the motion of the water. Short/fast shutter speed is all about capturing things in action. So as you can imagine, having a fast shutter speed is really good for things like sports and kids who move around a lot faster than we might like. You generally want to have as fast of a shutter speed as possible because it keeps your images sharp and clear.

Our next point on the exposure triangle is aperture. Personally this one is my favorite, because I love images with really blurry, creamy, soft looking backgrounds.

The aperture is how wide the camera lens opens while it takes the picture. This, as with all of them, has an effect on how much light enters the camera. But aperture probably creates the most noticeable artistic difference.

A narrow (sometimes called fast but that’s confusing. Conceptually think of it as narrow vs. wide) aperture narrows the area of the image that will be sharply in focus and blurs out everything else.

A wide aperture, make the area of sharpness wider, and keeps more of the image in focus.

(If you have trouble noticing the difference, look at the palm tree in the background.)

The first one has a very wide aperture and more of the image is in focus. Wider apertures are good for landscape photos when you want everything to be in focus, or in dark shooting conditions when you want to let a lot of light into the camera.

The second image has a narrower aperture and so less of the image in sharply in focus, and more of it is blurred in the background. Really only the one branch in the foreground is in focus. Narrow aperture means that less light is coming through the camera so you probably won’t be able to use it as effectively in dark conditions.

The confusing thing about aperture is the way that it is written. People will talk about f-stops, f-numbers, stopping up or stopping down which all have to do with the aperture. An aperture’s f-number will basically be opposite of what you’d expect.

Our last point on the exposure triangle is ISO.

ISO is a measure of your camera’s sensitivity to light. This was much more crucial to understand back when people shot film because the film itself would have its own ISO number and couldn’t change while you shot.

These days most digital cameras have quite a large ISO range available. My camera for instance goes from ISO 200-3200.

A high ISO number like 3200 will make your sensor very sensitive to light. Almost like it is more receptive. High ISO is good for capturing ambient light. It will give your photo a flatter more even brightness.

Lets look at an example.

I am only using one example this time because you ISO is something that you don’t mess around with nearly as much as the other two elements of the exposure triangle. Typically in whatever scenery you’re shooting you can set the ISO once and be good through minor light changes.

Having low ISO is not something you notice. It just means the image is sharp, clear, and free from grainy-ness. It’s only when your ISO number gets really high, usually when  you’re shooting in dark location, that you start to notice it.

If you look closely in the image above it’s very grainy. Especially the shadowed areas. It also feels much flatter and has less contrast. That comes from using a high ISO number.

Shutter speed is how fast your camera captures the image.

Aperture is how wide your lens opens to capture the image.

And ISO is how sensitive your camera is to light.

That is really all you need to know. There are many many many other buttons on a camera but if you can get a handle on just those three things, then you will be almost completely in control of your images.

Which is awesome because the whole point of taking pictures should be to capture what you are experiencing, not what your camera on auto mode thinks is happening!

I encourage you go get out there and play around with the settings on your camera to see for yourself how these three things work together.

Good luck and thanks for reading!