Friday August 12th 9:15 am I decided it was time to call it. My bus to visit a friend who lives a little ways outside of Seoul was supposed to leave at 9:20 and there was no way I was going to figure out 1. where I was and 2. where my bus was in the next 5 minutes. I’d successfully asked several people in my very broken Korean, “where is this?” while showing my ticket, and had received several equally as vague and incomprehensible pointed fingers in different directions.

When finally those pointed fingers had led me no where, and a not insignificant pool of sweat had formed at the base of my back, I decided that it was time to give up. I found the closest cafe, got a coffee and a wifi password, and sat down to call my sister.

When one is lost in an express bus terminal in Korea the only logical thing to do is to call one’s sister.

Impressed at my own level headedness given the situation, and after having cooled down thanks to the welcomed AC and iced coffee, I started texting my friends to tell them what happened. I figured I could just get back on the bus I had taken to get here to go back to where I was staying so I planned to head out once I finished my coffee. But in a gesture that just about sums up my experience having Korean friends, my friend Jay responded with, “I’m coming to pick you up. Let’s go somewhere.”

About 7 hours later, after a long and perfect day, I’d be standing in the exact spot that I had hoped to be able to find when I came to Korea.

She told me it’d take a little while for her get there (#seoultraffic) so I walked over to what I would later discover is a famous department store 신세계 Shinsegae. 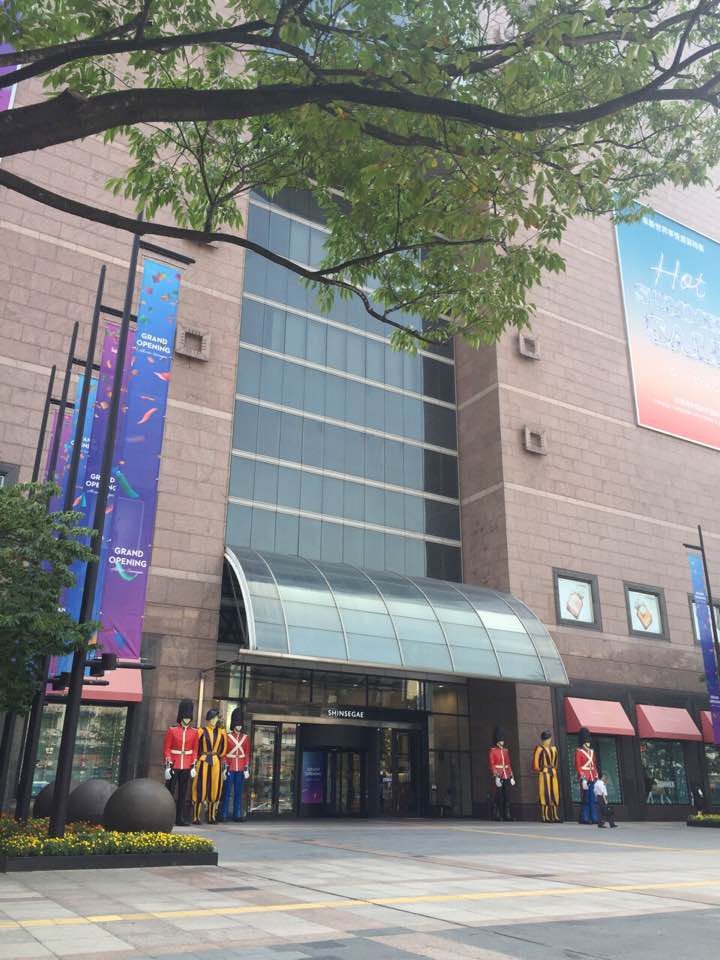 The timing worked out perfectly and I was able to get some shopping done and explore a little on my own for the first time. Then she picked me up, my angel rescuer, and we headed to 가로수길 Garosugil.

Garosugil is a high end area, which I’ve been told is the preferred place if you have a car because every cafe/restaurant offers valet parking, and we ate lunch in a beautiful cafe with delicious food and I was in awe of every moment. Even though I know that Korean aesthetics are gorgeous I’m still always blown away by how beautiful everything is.

After the most beautiful lunch I’ve ever eaten, we went to a cafe where each of the 4 floors had a different “concept.” The first floor was very “American kitchen in the 1970s” and the one we stayed on was like “rustic modern industrial chic.” (Great descriptions I know. I won’t be quitting my day job anytime soon.) 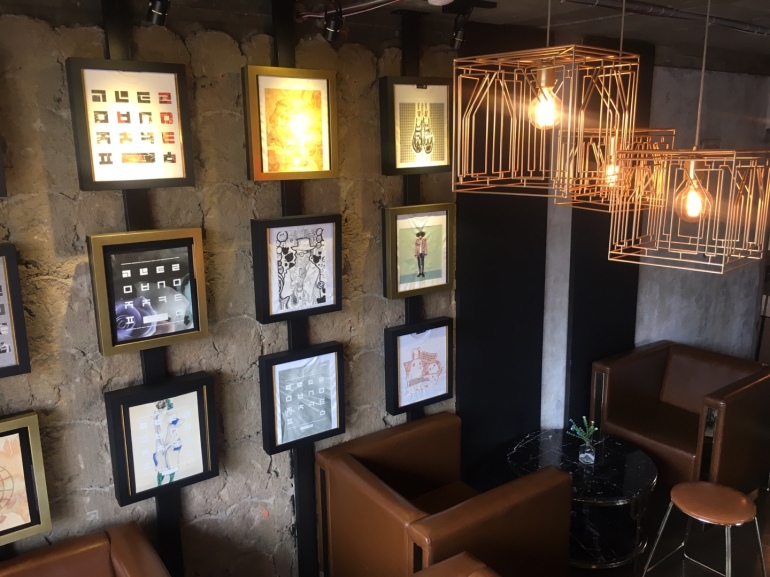 We talked for a long time about our memories in America, as we both left our university town less than 3 weeks ago it was all rather fresh in our minds. It’s crazy that my last night there was spent with her and our big group of friends. It was a sad and funny and special night and I still can’t believe that I got to sit in a cafe with her in Korea and talk about it. 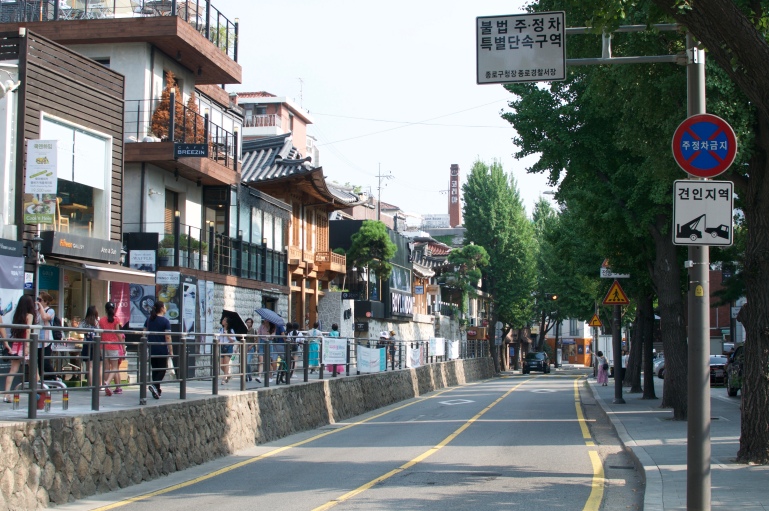 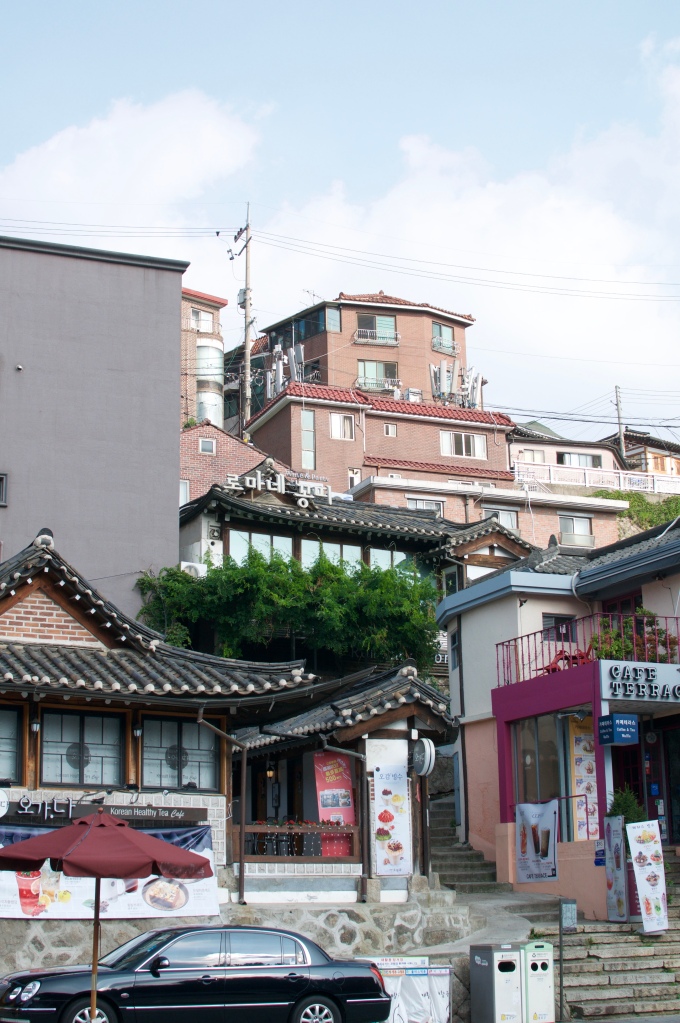 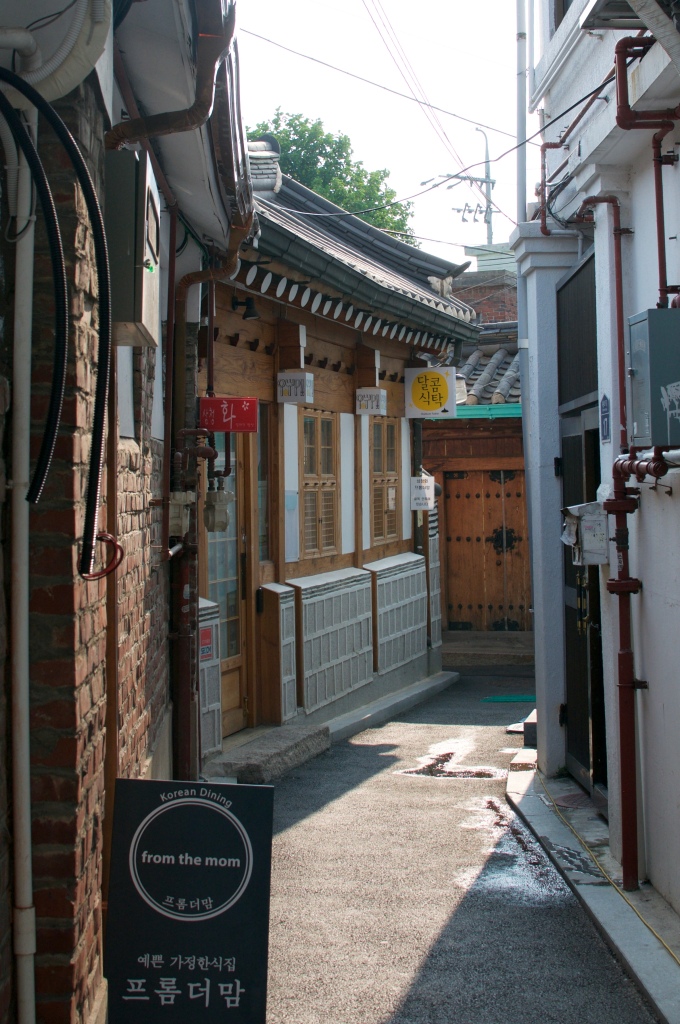 Then we hopped back in the car and I got to experience something of the reality of trying to drive anywhere in Seoul. We only needed to go about 3 miles but the GPS said it would take something like 20 minutes to get there. 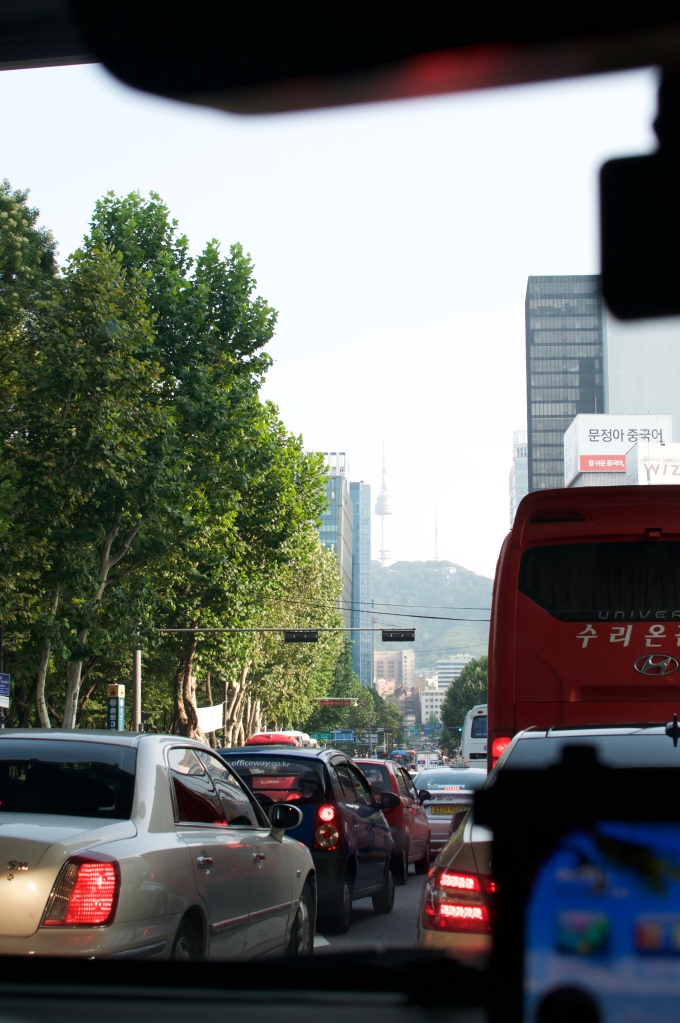 But once we arrived in 인사동 Insadong it was soon forgotten. Insadong is a shopping area that, while still being very tourist-y, is a more historic area as it’s quite close to Gyeongbokgung palace. All of the signs are in Korean to keep with the traditional feeling, even ones with English names. 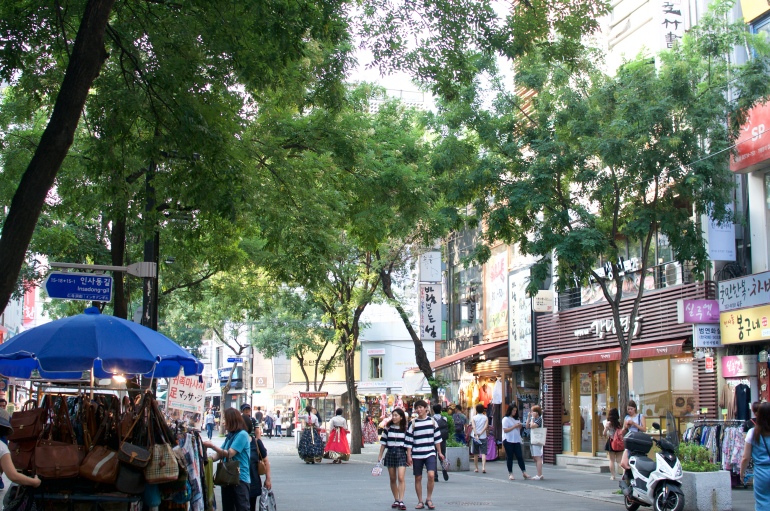 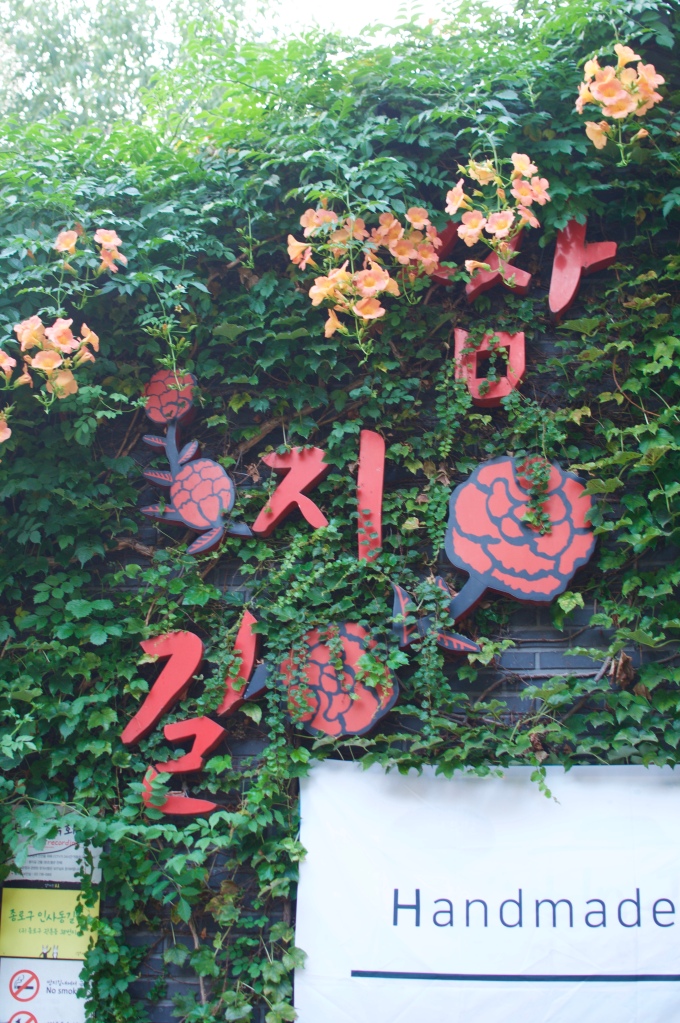 And should you wish you write down your love on a small charm and leave it forever as a symbol that your love will last as long as the plastic it’s written on, don’t worry there’s a place for that too.

The market is several floors of very unique shops, but as lovely as the shops are, the view from the top is just as lovely.

At this point the sun was threatening to set and we hadn’t yet made it to the spot I was most hoping to get a photo of. So in a race against the light, we booked it over to 북촌한옥마을 Bukchon Hanok Village. This is an area with very traditional style Korean houses. And after a discussion about whether we though it was all older people or rich people, we decided you probably had to be both to live in this area. There were a lot of signs telling the tourists to keep quite as people do actually still live here. 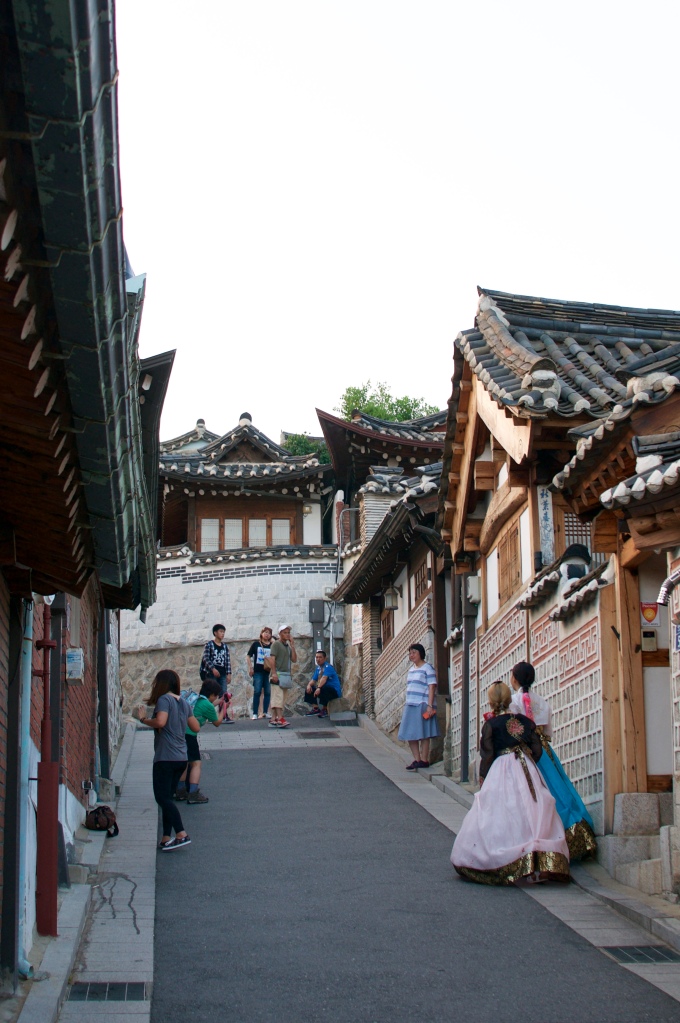 The walk up to the spot I was looking for was rather steep and we were losing the light with every passing second. But the long day of walking in the heat, the steep climb, and the still lingering jet lag were completely worth it when we got to the top and turned around to see the view. 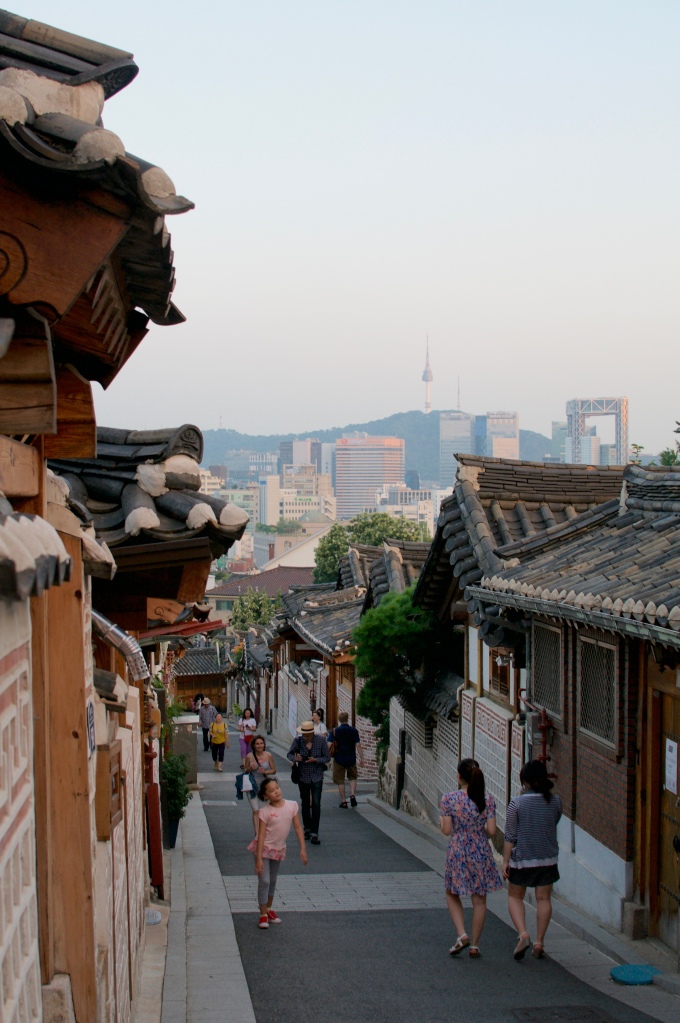 This photo is everything I have loved about being in Korea. It’s the tradition that is still so much in the foreground of Korean culture and society, with Namsan Tower and the Samsung building in the back as beacons of where the country is headed in the future.

The setting sun was casting a warm glow on everything and again I had to take moment I wonder if I was really here. I got my photo. We couldn’t have timed it better.

That morning I had been sitting, lost in a bust terminal, and now I was standing in the one spot in all of Korea that I had hoped to find.

At that point I put my camera away to enjoy the night with my friend. We ate Korean BBQ, and hung out with her friends at a pub in Hongdae. And despite my incredible jet lag, and having walked farther in one day than I usually do in a week back home, it was the most perfect night. When I finally shuffled back into my friend’s apartment where I’m staying I don’t think I’ve ever been so tired or so happy.

So the moral of the story? Even if you miss your bus to 청주 don’t give up on the day completely. Sometimes you have a guardian angel who will come pick you up and take you on the most amazing adventure.